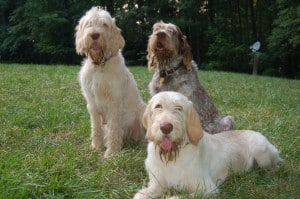 As long as he is given plenty of attention, the Spinone Italiano is content to be a member of the family. They do not tend to whine or bark unduly and are very patient. They will sound an alert when someone comes to the door, but while they may be reserved towards strangers, they adapt well. As mentioned above, Spinone Italianos respond well to obedience training. However, they do not like to do unnecessary work, a trait that may result in stubbornness when asked to do something like retrieve an inanimate object.

However, these hunting dogs are more than willing to retrieve game. They tend to work slowly and steadily (remember the tortoise?), something that is sometimes misinterpreted as laziness when in actuality it is carefulness and attention to detail. Spinone Italianos are not an aggressive breed. One will not attack out of hand, but if something is threatening the dog or his family he may lash out at the aggressor. 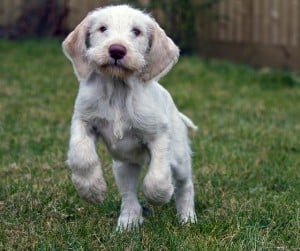 The Spinone Italiano is very unique in appearance. Large yet lean, the breed can reach up to 26 inches in height yet rarely exceeds 80 pounds. They have a light colored coat, usually either all white or white with yellow or tan markings. The coat is quite short and coarse with a wiry texture. They have a very distinguishing face, with bushy eyebrows and an abundant beard and mustache. This interesting face is further accentuated by what some have called “human-like” eyes, but their ears are typical of hound ears, being large and droopy.

They are extremely strong, which is apparent in somewhat square, sturdy build. They can hunt on all terrain because their coat protects them from both water and inclement weather. The Spinone Italiano likes to jog and is a fairly high-energy dog when outdoors. They can jump quite high and love to play.The Spinone Italiano has existed since the 14th or 15th century. However, because of reckless crossbreeding the original stock likely died out and was recreated around the middle of the twentieth century.

Because it has only recently been reintroduced to the world, the Spinone Italiano is quite rare. However, this breed (and its various relatives) has long been considered an excellent hunting dog, as it is a marvelous pointer and retriever. It is only within the past couple of decades that the Spinone Italiano has been recognized in the United States. The Club Italian Spinone, a sister club of the Club Italiano Spinone of Italy, was formed in the mid to late 1980s, along with The Spinone Club of America.

While Spinone Italianos have relatively short hair, it is necessary to brush them about every other day. Because they are fairly athletic dogs, if not overly exuberant, they should be taken for several long, quick walks daily. They also should be given the opportunity to play off the leash in a secure area.Some health problems that are relatively common in the Spinone Italiano include hip dysplasia, bloating, and an inherited disease, which can cause either an abnormal gait or Cerebellar Ataxia.