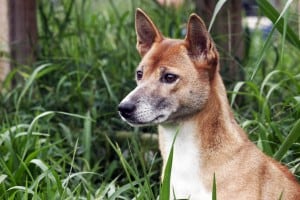 However, they are very active and retain many feral instincts. If one desires to keep a New Guinea Singing Dog as a pet, it is necessary to acquire the animal as a puppy and socialize it well, both to family and to strangers. A well-socialized Singing Dog can be quite affectionate, giving kisses and even sitting on laps. 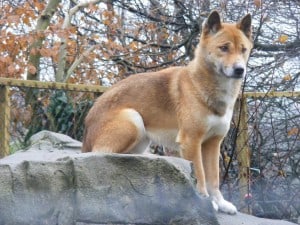 However, an under socialized Singing Dog is very timid. Singing Dogs are very curious animals that retain their hunting instinct. They should be left on leash except in very secure areas. If something interests the Singing Dog and they have an opportunity to escape, they will do so. They are not running away from their owner, but rather running to any awaiting adventure.

Most Singing Dogs, if they do escape, will try to return home after their curiosity has run its course. Singing Dogs, as puppies, have been responsive to obedience training, which is essential to curb some of the native instincts. Singing Dogs should not be left alone for long periods of time because their native curiosity makes them destructive. Singing Dogs can do well in most environments, including cities provided they receive enough exercise. 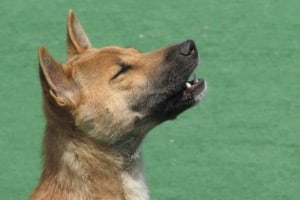 The New Guinea Singing Dog is moderately sized, reaching about 18 inches in height and weighing up to 30 pounds. They have a fairly short, thick coat. The coat appears in shades of red, tan, sable and black, always with white markings. They have small, erect ears and triangular eyes. Singing Dog’s necks are quite long and their chests are deep and broad. 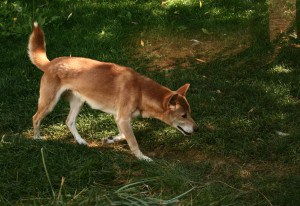 The Singing Dog is closely related to the Australian Dingo. All of the domesticated Singing Dogs in the world today, a total of about 100, are descended from eight wild dogs brought from New Guinea. The American Rare Breed Association recognizes the New Guinea Singing Dog.

Singing Dogs should never be allowed off leash except in a secure area. They are very adventurous and have no fear of cars, which makes the modern world quite dangerous. Patient obedience training is essential. They should never be hit and the owner of a Singing Dog should not show aggression towards them. This will make them either timid or aggressive.