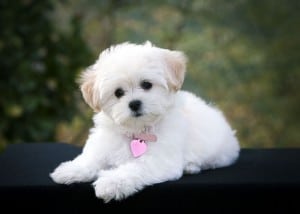 Poodles were originally called “Water Dogs,” and its current name was not used until the nineteenth century. In fact, the name Poodle (from the German word “pudel” for “water”) suggests that breeders and owners chose a name for the dog that reflected its love of water. Poodles have had many roles throughout the ages – they have been used for sporting (as gun dogs and retrievers), for entertainment purposes, and, most popularly, as pets.

Poodles are widely known the world over as extremely bright dogs. There are three recognized sizes of poodles, and they are the Standard, Miniature, and Toy. The Standard Poodle is the predecessor of the Miniature and Toy Poodle. The Poodle is also the national dog of France. All sizes are affectionate and fun loving. They also enjoy working, and they seem to respond well to other animals. Standard Poodles are a lot less likely to bite than Minis or Toys, but all Poodles should be trained and socialized at an early age.

Poodles have done extremely well in obedience, and though they do bark quite a bit, they are not aggressive. Poodles are also known for their retrieving abilities, and they excel in the water. Their appearance can be elegant or playful because its coat lends itself to many different trimming styles. Poodles make great pets in cities and apartments, as long as they are exercised often and have a lot of interaction with its owner. Unlike Toy Poodles, Standard Poodles are kind and sweet with very few health problems. 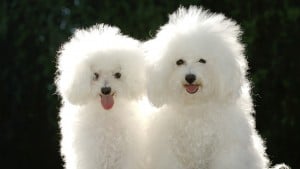 Its coat is dense and hairy, and it may be curly or wiry. Acceptable colors are solid gray, silver, “apricot,” black, white, blue-gray, brown, or cream-colored. Poodle owners have been known to be very creative with Poodle trimmings, but few know that its traditional trimming was devised to help protect his joints in the water while retrieving. Poodle coats can be used to express any number of personalities – glamour, style, dignity, and/or impishness. He will need to be clipped once every 6 to 8 weeks, much more often than the Mini and the Toy. Poodles will grow to heights of 22 to 27 inches and weigh as much as 65 pounds.

Poodles do not shed, but still need to be combed and brushed a few times a week. They also need to be clipped, scissored, and shaped at least once every four to six weeks. Standards need more exercise than miniatures and toys, and will require at least several brisk walks per week. Potential owners should note that Standard Poodles are prone to hip dysplasia, eye problems, epilepsy, bloat, sebaceous adenitis (a skin disease), and kidney disease.