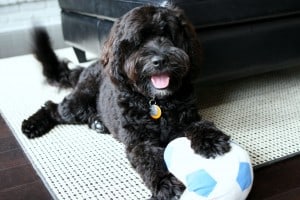 Historically, the Portuguese Water Dog was essential to the fishermen along the coast of Portugal. Its name in Portuguese, Cao de Agua, means “dog of water,” a name which originated because the dog was used to retrieve and dive for fish that had freed themselves from the nets, as well as retrieving broken nets and tackle that had washed overboard.

They also performed a great deal of other very useful tasks for their owners.The Portuguese Water Dog is a playful, good-natured dog that makes a good companion or working dog. Receptive to obedience training, the Portuguese Water Dog nevertheless requires early training to lessen such traits as excessive barking and timidity towards strange people and animals. 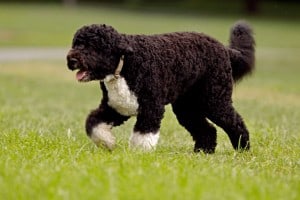 They make fairly good watchdogs, as they are very protective of what they consider their territory. However, they make bark excessively to guard their home, talk to other dogs or to get attention. They also have a tendency to take things into their mouths, a trait, which they must be trained out of. The Portuguese Water Dog, due to its long association with water, is not truly happy unless it lives near water. The breed is quite intelligent and obedient, provided it has sufficient training, yet it is not a suitable pet for the novice dog owner.

The Portuguese Water Dog is relatively large, reaching up to two feet in height, and weighing up to 60 pounds. Their coat has two varieties – curly or wavy. The coat is black, white, shades of brown, or black/brown with white markings. Two clips are common among Portuguese Water Dogs. These are the lion, in which the face and hindquarters are shaved, leaving a lion-like “mane,” and the retriever, in which the dog is evenly clipped all over. The dog’s tail usually has a plume at the end is shaved elsewhere.Portuguese Water Dogs usually lived on the boats when the fleets were docked and guarded their master’s property. 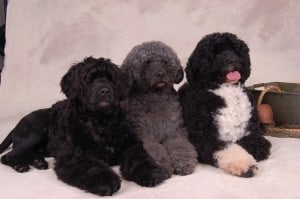 When at sea, the dogs were used to pass messages between boats or from ship to shore. The fleets, with the dogs in them, traveled from the Atlantic Ocean to the freezing water near Iceland, where they caught saltwater codfish. With advances in agriculture and technology, the breed declined in number shortly before World War II. However, extensive efforts were made by the Portuguese Kennel Club to rebuild the breed, an endeavor that has been successful. The Portuguese Water Dog was admitted into the American Kennel Club in 1983.