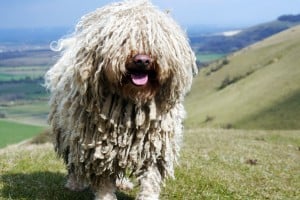 The Puli may be one of the oldest dogs in the world. Some believe that they may go back to the time of the ancient Egyptian pharaohs, as a statue of a dog resembling a Puli is reported to have been seen in the tomb of at least one of the ancient kings.”Its not a dog, it’s a Puli”! The Puli is one of the most unique dogs in both beauty and temperament. The Puli has one of the most distinctive coats among all dogs. If you have ever met a Puli you will most likely never forget the experience. The Puli is a very energetic dog, both as a pup and as an adult.

They make excellent pets for families that live in the city or in the country, provided they get plenty of exercise in both. The Puli does well with children and other animals, as long as they are socialized when young. They are also good pets for families with other animals, provided socialization occurs, although the Puli’s natural instincts may result in an attempt to herd other pets. Pulik (the plural of “puli”) are very loyal to their families. 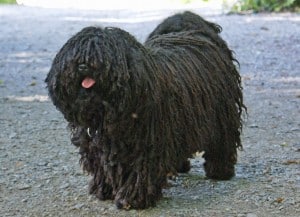 They do well in obedience training and are cautious of, but not aggressive towards, strangers. Puli coats make them suited to any environment. They can deal with both extreme heat and extreme cold. Pulik are very active animals and love to run and play with other dogs or people. Some Puli enjoy swimming, but others do not and the animal should be supervised near water. The Puli shows remarkable agility. And the Puli is perhaps best loved for his outstanding personality and intelligence.

The Puli is different from many dogs, they are selective in who they choose to befriend, though if they choose you they are most devoted. They have a self-confidence not seen in many other breeds. The Puli can also be a vocal breed, though they are not known to be excessive barkers.The Puli is a very unique looking breed. They are a medium sized dog, with females standing 14 to 16 inches tall and males standing between 16 and 17 inches, according to the UK’s current breed standard, and weighing between 30 and 35 pounds. The corded coat of the Puli is its hallmark. 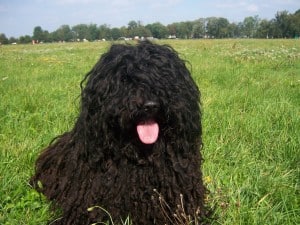 The Puli’s coat is double, with a long, course, curly outer-coat and a soft, thick, wooly undercoat. The two coats mingle to produce long cords, which can resemble dreadlocks. After cord formation their coats are described as being fairly low maintenance, but prior to cord formation and during regular attention is required. This should be taken into consideration before selecting this breed. The coat of an adult Puli can reach the ground, making it susceptible to picking up dirt, leaves, and other matter. Coat colors can vary from county to country. 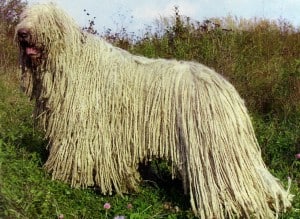 Their coats will change to gray as they mature. The Puli’s body is square and fairly muscular. Their tails curl over the back. The eyes of the Puli are dark and almond shaped and they have medium sized, black ears. Because of the Puli’s unique coat, it can often be difficult to tell the front of the dog from the back. They are a square and compact dog whose body can sometimes appear longer due to the development of their coats.

As is the case with many ancient breeds, much of the history of the Puli is the subject of debate and mystery. The Puli is most certainly an old breed. It is agreed that some 1,100 years ago they first entered Hungary with the Magyars as herd dogs and shepherd’s companions. Unfortunately much of their earlier history has been lost. It is reported that today many shepherds often prefer the black Puli to the white, as they are easier to see among the flocks. The Puli was used to herd the animals while the larger Komondor was used to guard the flock. Prior to World War II, the Puli breed had become nearly extinct. 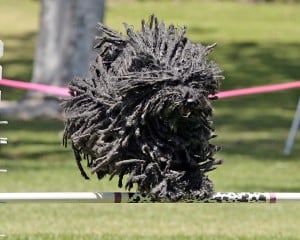 However, a devoted breeding program has increased the numbers of the breed drastically. The breed standard for the Puli was first written in 1915. The Puli was first recognized in the United States by the AKC (American Kennel Club) in 1924, and the Puli Club of America formed in 1951. Please see the additional story on Puli’s written by Elizabeth Williams for more information on this incredible breed.

Because of its coat, the Puli requires quite a bit of care. After cord formation their coats are described as being fairly low maintenance, but prior to cord formation and during regular attention is required. This should be taken into consideration before selecting this breed. Their cords should be separated by hand occasionally to keep them from matting. Bathing a Puli can take up to an hour and the owner must be sure to rinse all shampoo from the dog’s coat.

A Puli can take up to three days to air dry. Blow-drying can take as much as six hours. Besides grooming, Pulis require lots of exercise. If not exercised sufficiently, your Puli may develop serious behavioral problems.Pulik are generally healthy animals. One common problem that a reputable breeder will check for is hip dysplasia.