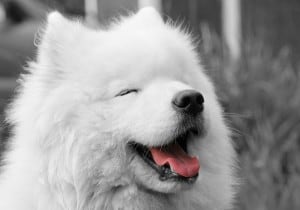 The Samoyed, affectionately known as the “Sammy” by many lovers of the breed, is a very old breed that has existed for thousands of years. Today this breed still retains worldwide popularity both as a working dog and as a pet.The Samoyed breed is a vocal breed. They love to communicate with their owners through barks and other noises. Samoyeds are gentle, companionable and loyal dogs that make a great pet. The Samoyed is a keenly intelligent animal that thrives on love and play. They are also very social animals and if left alone for long periods of time they can become destructive and loud.

The Samoyed will do best in a household where they can receive as much love as they give. The Samoyed can sometimes be difficult to train because they are so intelligent and sometimes stubborn. If training begins at an early age and is done with consistency, patience and love the results can be most rewarding. Positive reinforcement is the key when training a Samoyed. In general, the Samoyed is a loyal and lovable family pet.

Samoyeds are striking dogs, with their Christmas white coats and intelligent expressions. Samoyeds are medium to large sized dogs, reaching up to two feet in height and weighing between 35 and 70 pounds, but their size seems much larger because of their copious white fur. Almost all Samoyeds are pure white, many with biscuit markings on the face and ears, although some Samoyeds are cream or light tan. The Samoyed’s eyes are dark and the lips and nose black.

Some Samoyeds have blue eyes, which is a disqualification when exhibiting the dog. Samoyeds have deep chests and powerful legs and necks. They move quickly, but gracefully.The Samoyed has a very interesting history. Thousands of years ago, the Samoyed people of Iran migrated to Siberia. This tribe consisted of several families, and part of each family was their dog. The dogs were immensely useful in herding reindeer, pulling sleighs and warming up cold bodies on cold Siberian nights. The first non-Samoyed person to become aware of the dogs was Adam Brand, in 1696.

The Samoyed breed is one of the few that have remained pure since ancient times. While other breeds have strains of wolf and fox, the Samoyed has none. The first Samoyeds available to Europeans were those of Ernest Kilburn-Scott of England who placed an advertisement offering Samoyeds for sale in 1891. The first Samoyed in the American Kennel Club Stud Book, in 1906, was owned by Mercy d’Argenteau, Princess of Montyglyon. 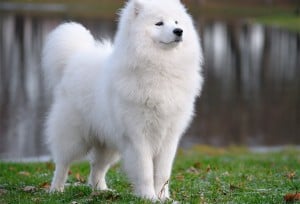 Because of the Samoyeds abilities as a sled dog and willingness to work, a Samoyed was the lead dog on Roald Amundsen’s 1911 trip to the North Pole.Because of their coats, Samoyeds may not thrive in very hot regions, though many have done quite well in warm areas such as Texas, Arizona and Florida. They are adapted to cold weather and need to be kept carefully groomed in the summer. They should be brushed every day, or at least several times a week. Samoyeds shed once a year and during this time should definitely be brushed daily.

Samoyeds are not strangers to hard work and need lots of exercise to keep them happy and healthy. They should be given brisk walks several times daily.The Samoyed, like many larger breeds, can have a tendency towards hip dysplasia. Because the Samoyed’s coat is so thick, fleas can also be a problem. Other common ailments associated with the Samoyed breed include hypothyroidism, Von Willebrand’s Disease, and retinal problems.