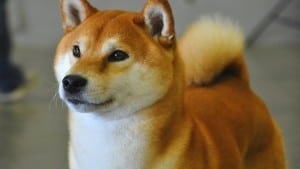 Shiba Inus were originally bred to hunt small game and birds in the mountainous regions of Asia, making their small size, color, and agility a virtue. The name of the “Shiba Inu” could have a couple of different origins. In Japanese, the word “shiba” can mean either “brushwood” or “small,” meaning the name could describe the dog’s color, size, or both. “Inu” simply means “dog.”

While Shiba Inus may seem somewhat standoffish at first, especially towards strangers, they form strong bonds with their family. It should be noted that if a Shiba Inu is to be kept in a house with children and other animals socialization is required from an early age. Because Shiba Inus were originally bred to hunt small game and birds, they may not do well with small animals. They usually do well with other dogs and cats, however they may attempt to dominate dogs of the same sex. Shiba Inus rarely bark, instead they make a kind of shrieking noise when facing a perceived threat. Because Shiba Inus are rather independent dogs the trainer must be patient. 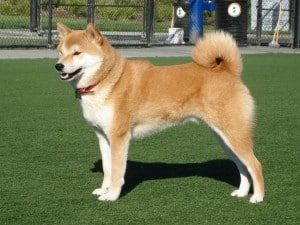 Successful training must begin very early and be ongoing. They are naturally very neat and tidy, so housebreaking is usually not a problem. Shibas are quite active outdoors, requiring a significant amount of exercise daily (although they will exercise themselves in a sufficiently sized yard). However, they are only moderately active indoors and so could be happy in an apartment, provided they are given plenty of exercise. The Shiba Inu is a very confident breed that considers itself part of the family, making it somewhat protective.

The Shiba Inu is a moderately sized breed, reaching up to 16 inches in height and weighing between 20 and 30 pounds. The breed resembles a fox in appearance, with a small, furry body and a pointed face. They have small, dark eyes and a dark nose. The Shiba Inu’s double coat is quite thick, most often appearing in shades of red, with or without a black overlay, or black with tan markings. Most Shiba Inus have white or off-white markings on the face and chest, and sometimes have similar colored markings on the legs and tail. The Shiba Inu’s tail is very thick and curls over the back, much like that of a Spitz. 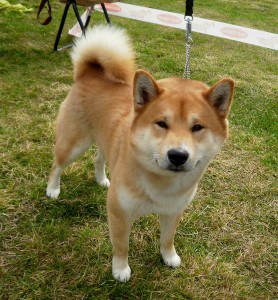 The Shiba Inu descends from an ancient Asian breed that was brought to Japan more than two millennia ago. Today’s Shiba Inu is most likely descended from Chow Chows and Kyushus, and is related to the Akita and five other Japanese Spitz-type dogs, of which it is the smallest. During World War II, the Shiba Inu breed became nearly extinct. After the war, however, breeding programs were established using the three remaining bloodlines of the breed. These three lines were the San In Shiba, the Mino Shiba and the Shin Shu Shiba. The Shin Shu Shiba was the most popular line. The first Shiba in the United States was the pet of an American military family who brought the dog with them when they returned to the states in 1954.

Since then, the Shiba has been gaining popularity in the United States. It is currently the most popular dog in Japan. All major kennel clubs recognize them. Because the coat of the Shiba Inu is quite thick, it should be brushed several times a week. They need plenty of exercise, about two walks daily, as well as time to play freely.Shiba Inus are generally very healthy dogs. The few problems that arise are genetic and include PRA, hip dysplasia, and patellar luxation.