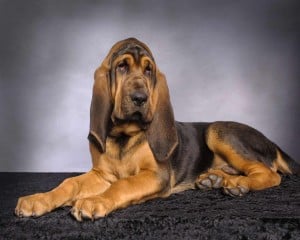 They adore the company of children and will tolerate even the roughest of play. For this reason, it is necessary to supervise the dog when around boisterous youngsters. Otherwise, the kids could get too rough and hurt the dog, and he would just accept the actions. Bloodhounds are wonderful dogs. They are sensitive and can be somewhat timid. They are quite gentle, although when around dogs of the same sex the St. Hubert Hound can become somewhat aggressive. 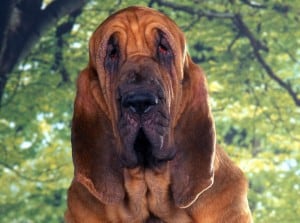 The St. Hubert Hound is receptive to obedience training, although the owner of this dog should be patient. Training needs to be gentle yet firm and consistent. The St. Hubert Hound is a somewhat independent animal so not too much should be expected in the way of obedience. However, they are gentle enough animals that their lack of training should not be too much of a problem. St. Hubert Hounds need a lot of exercise and so should not be kept in an urban setting. They love to run and can walk for hours, so they are a good pet for those who enjoy hiking.

St. Hubert Hounds are fairly large animals, reaching nearly two feet in height and can weight up to 50 pounds. They are very powerful animals with strong, muscular legs, chest, and shoulders. They have a short, tough coat, usually in black and tan, liver and tan, or red and tawny. They have a loose skin and jowls. The eyes of the St. Hubert Hound are deeply set and have drooping lower lids. They have a black nose and a long muzzle.The St. Hubert Hound and similar breeds have been in existence since about the eighth century. They are named after Hubert, the son of the Duc de Guienne, who was quite fond of hunting. 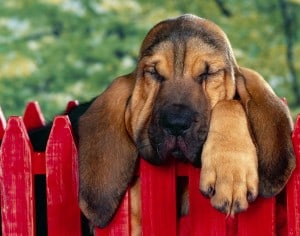 After an encounter with a giant stag that bore a cross on his chest, Hubert devoted his life to the church but continued to hunt. While at the monastery he established in the Ardennes, Hubert bred a new scent hound from dogs brought from Western France. These dogs were imported to England as early as the 13th century. Scottish nobility used the dogs to drive game into the open, where smaller, faster dogs caught the game. After Hubert’s death in 726, he was made the patron saint of the hunt and the breed was named after him. All major kennel clubs recognize the St. Hubert Hound.