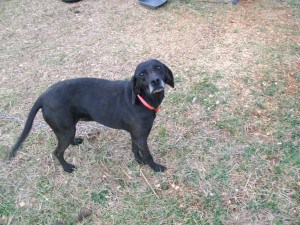 The Stephens Cur was originally bred in the United States as a hunting dog. They were initially created to hunt small game, such as raccoon and squirrels and are reported to have excellent treeing instincts. They have also been used in packs to hunt larger animals such as black bear and mountain lions. The Stephens Stock dog has retained a very strong love of the hunt. They are generally not recommended for houses that do not intend to hunt them because their drive to work is so strong. These are intelligent dogs that are easily trained. They are good with children, though may be aloof among people they do not know. The Stephens Stock dog can be protective of its owners and for this reason, makes a fair guard dog.

These are energetic and free-spirited dogs that should be exercised for at least 30 minutes a day. These dogs seem to thrive in a variety of temperatures.Stephens Stock dogs are black medium sized dogs with white markings. They should always have more black than white, and in the show ring no more than one-third white is permitted. Their outer coats are short and are seen in both smooth and rough varieties, though smooth seem to be more common. Albino Stephens Stock dogs are not permitted in the show ring. 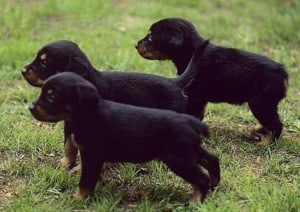 The undercoat of the Stephens Stock is also short, but soft and rather dense. Their eyes are accepted in a variety of colors. Their noses are accepted in black, as well as self-colored according to the coat. The average mature Stephens Stock dog should weigh between 35 and 55 pounds. Dogs larger than this will not be qualified for show. They will measure between 16 and 23 inches; once again, larger dogs are disqualified.

These excellent hunting dogs were initially bred as a type of Mountain Cur, but eventually they became their own breed. They have been accepted by several breed clubs including the UKC and the CKC, and are generally classified among the hounds or more specifically scent hounds. The Stephens Stock is also called the Stephens Cur and the Stephens Stock Mountain Cur.