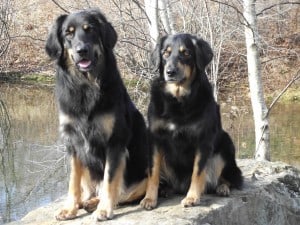 In spite of its long history, most authorities believe that the Tahltan Bear Dog is now extinct, as the last dog registered with the Canadian Kennel Club was in the late 1940s. The Tahltan Bear Dog is thought to have been one of the favorite dogs kept by the Tahltan Indians of British Columbia. They were used to flush out game and keep it occupied until the hunters arrived and could bring down the kill with their bows.

They were especially skilled at assisting in the pursuit of large bears such as black bears and grizzlies, which is where the name “bear dog” comes from. The Tahltans also used the Bear Dogs to hunt numerous other types of animals, including beaver, elk and porcupine. The Tahltan Bear Dogs were particularly adept at hunting during snowy weather since, because of their lightness, they were capable of running on top of the snow. In addition to flushing game the Tahltan bear dog is a good tracker.

The Tahltan Bear Dogs were carried by the Indians in small moose hide packs during the day and were released at night to guard the camp or during the day when game was close by. The dogs were carried in packs not only to conserve their energy but also because the dogs were so valuable and were indicative of their owners status and so were well protected by all. The Bear Dog’s body was often compared to a fox and they could move equally fast as the fox. 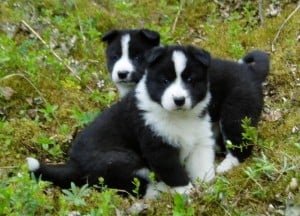 He was, however, mistaken because by the mid 1930s, the Tahltan Bear Dogs were quite common. The growth of the Bear Dogs population was due, in part, to the efforts of T.W.S. Parsons and J.B. Gray, the British Columbia Provincial Police Commissioner and a constable. These two men fought for the Canadian Kennel Club to recognize the breed, which they did, around 1939.

The American Kennel Club recognized the breed soon afterwards. In 1974, however, the Canadian Kennel Club took away the Tahltan Bear Dog’s recognition since no new dogs had been registered since 1948. It was at this point that the dog was considered extinct. Despite the assumed extinction of the breed, the Canadian Post Office honored the Tahltan Bear Dog in 1988 by releasing a commemorative stamp with the likeness of the Bear Dog on it.

A series of four such stamps were released, each honoring a different dog native to Canada. Whether or not the Tahltan Bear Dog is truly extinct or not in unclear. Although no new dogs have been registered in over fifty years, some people still claim to see dogs resembling the Tahltan Bear Dog in various areas of Canada. Some breeders in the Yukon are attempting to recreate the dog from what are assumed to be Tahltan mixes. It is hoped by many that these efforts succeed.