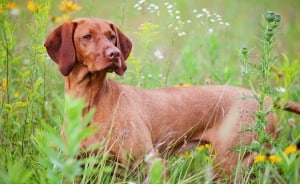 The name “Vizsla” comes from the Hungarian word for pointer. In the past owning a Vizsla was a sign of aristocracy in Hungary. Vizslas, also known as Hungarian Pointers, can be quite tenacious and are easily distracted from the task at hand so training should begin early and be ongoing. They shy away from loud noises and so should be introduced to noise and activity at an early age, especially if they are to live in a more urban area. Although they are small enough to live in an apartment or other confined area, they ideally should be kept in a rural or suburban area where they have plenty of room to run.

Because of their high energy levels, Vizslas may be too enthusiastic for young children although they generally enjoy the company of kids. They also are not at all reserved around strangers or other animals. They were bred as hunting dogs and to be truly happy must be allowed to retain some of that instinct. They need something to do and are not a good dog for an idle person. If they do not receive a sufficient amount of exercise, they can be very destructive and disobedient. However, with the right kind of owner they will be quite affectionate and devoted. The family of a Vizsla should be both patient and determined to train their dog. 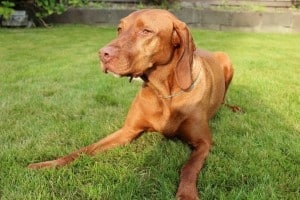 Many Vizslas are extremely shy. A prospective Vizsla owner should research the line of a dog they are considering acquiring to make sure it does not have a history of dogs that are excessively shy or high-strung. The Vizsla is an attractive dog with a short, smooth coat. Coat colors range from golden to shades of tan and rust, with some small white spots possible in the chest region. They can grow to be about two feet in height and may weigh as much as 60 pounds. They have a broad skull and a lean head with a long muzzle. Their ears are somewhat long and rounded. Eye color is usually similar to that of the coat.

Vizslas originated in Hungary and likely are the result of breeding between two very old breeds, the Transylvanian hound and the now extinct Turkish yellow dogs. Other breeds that have lent their blood to the Vizsla breed are the German Shorthaired Pointer and the Pointer. They were originally bred for hunting birds and small game. In spite of its long history the Vizsla was almost extinct by the early 20th century. 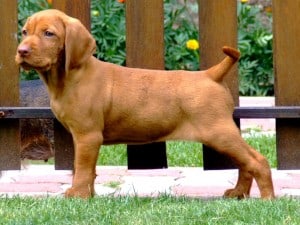 The Hungarians began to rebuild the breed after World War I, but after World War II when aristocracy was scorned the Hungarians were afraid the conquering Russians would succeed in killing off the entire breed. However, the breed was saved when devoted owners and breeders of Vizslas smuggled the dogs into other countries, including Austria and America. The American Kennel Club recognized the breed in 1960.

Because of the Vizsla’s short coat, they do not need to be groomed excessively. They should, however, be brushed once a week. They definitely need lots of exercise and should be allowed to run and explore off the leash often. They need to be walked and run daily otherwise, they can become very destructive. Some health concerns the owner of a Vizsla should watch out for include hemophilia and hip dysplasia.