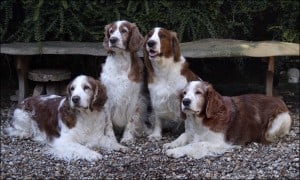 They do enjoy the company of children, provided the child does not play too roughly. However, because these spaniels are so enthusiastic as puppies, they may be overly energetic for very young children. They are not particularly fond of strangers, though they will become used to an unknown person after a few meetings. They are generally friendly with other animals as well. They are skilled hunters with incredible agility, speed and determination. If trained at a young age, they are more than eager to flush and retrieve game for their owner. 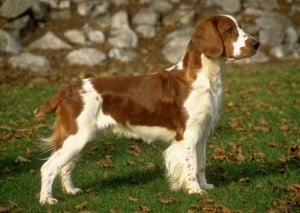 Welsh Springer Spaniels are quite responsive to obedience training, partly because they are always striving to please their owners. This breed is easy to train, a good watchdog, hunter, and a marvelous friend. Elegant in appearance, they rarely exceed 19 inches in height and 50 pounds in weight- they are a moderate sized breed. Their coat is fairly long, and is always straight, smooth, and supple. The coat is never wiry, and always brick red and pure white, a characteristic that distinguishes the Welsh Springer from other Spaniels. Some feathering is apparent on the legs and chest. 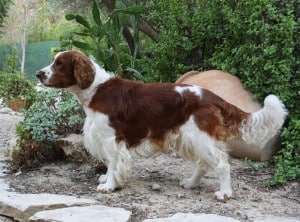 It is believed that the Welsh Springer Spaniel is related to the Brittany Spaniel, however, the Welsh Spaniel is smaller than the English breed and is less well known in breeding circles. The classification “springer” comes from the breed’s job of flushing, or “springing” game from its hiding place. It is thought that immigrants from Brittany moved to Wales, bringing their beloved companions with them. The Welsh Springer Spaniel as a breed did not leave Southern Wales until World War I, although it was beginning to become known in breeding and showing circles as early as 1900. In 1902 the British Kennel Club first recognized the breed. Up until this time the breed was known as “Welsh Cocker Spaniel.”