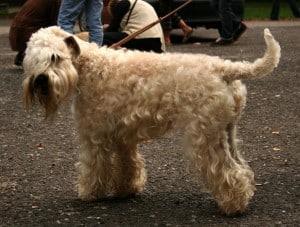 The Wheaten Terrier has long been known throughout the British Isles as a known rat catcher, hunter, guard dog and herd dog. While the Irish nobles kept larger dogs such as beagles and hounds, the common people of Ireland kept Terriers such as the Wheaten and its cousin, the Kerry Blue, the Glen of Imaal, and the Irish Terrier. The Wheaten has the calmest personality of the four. The Wheaten Terrier is usually described as a happy and playful dog.

Wheatens are wonderful family pets that can do well in both urban and rural environments, provided they are given plenty of exercise. Well-trained Wheatens are usually good with children and can easily learn to tolerate other animals and strangers. Early, consistent training is absolutely essential since the Wheaten will happily take over as “alpha dog” if the owner does not assume that role. This breed is not for the quiet, introvert! Their energy level is too high. But they are just about perfect if they understand the family hierarchy. They respond quite well to obedience training, provided it begins early. Unlike some other Terriers, the Wheaten is not overly exuberant and is definitely not a “yappy” dog, although they may bark to sound an alarm. They are friendly towards children, provided the children are not too rambunctious. 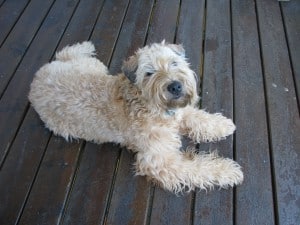 They tolerate other animals, although they may get into fights with other dogs and cats from time to time. They also enjoy human company, even that of strangers, although they can make good guard dogs. Wheatens respond well to obedience training, although patience is necessary, and can adapt to almost any environment. They are very friendly and playful animals. They love to jump, either onto people or just for the sheer joy of flying through the air. They need human interaction. If not played with, they can become aggressive and destructive. Wheatens love to play, especially active games such as catch. They also love to dig, so fences, with a material that cannot be dug up placed, underneath are essential.

Wheatens are usually between 17 and 19 inches in height and rarely exceed 40 pounds. While they are often born black, a mature Wheaten is always golden, or “wheaten,” in color. They have a more abundant coat than some other Terriers, and it is quite soft. It is very thick and wavy. The softness of the coat is quite unusual among Terriers. Because they were bred to work in the harsh climates of the British Isles, most Terriers have both an undercoat and an overcoat, while the Wheatens coat is soft, wavy, and a single piece. 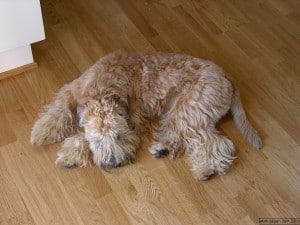 It covers they entire body, as well as the head. They have smallish, droopy ears, a black nose, and brown, slanted eyes. Despite its long history, the Wheaten was not shown until 1947 when it was shown at Westminster. This was soon after the first Wheatens were brought to the United States. Further, it was not admitted into the American Kennel Club until 1973, although the Irish recognized it as a breed in the 1930s. Because the Wheaten’s coat is so thick and wavy, it should be frequently. A good grooming once a week is usually sufficient. The coat should be trimmed four times a year. Wheatens should be walked several times daily and be given plenty of time to play with their families.

Like, some other terrier breeds Wheaten Terriers may have allergies to wheat and other ingredients which are common in many commercial foods. It is important that diets be selected that eliminate allergic responses. Some other health problems that may be seen among Wheatens are progressive retinal atrophy, and kidney problems. When considering acquiring a Wheaten, the line should be researched to make sure serious genetic problems do not exist.