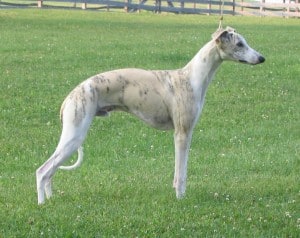 The derivation of the Whippet breed is largely unknown. They were originally known as “Hitalians,” and it is thought that they came into existence by breeding Italian Greyhounds with other, breeds, namely Greyhounds and Terriers.The Whippet is a friendly and loving dog that can prosper in almost any environment. They are very adaptable and are good family pets. The Whippet’s adaptability is evidenced by the fact that they are happy in both country and city settings. The only concession that really needs to be made for a Whippet to be entirely happy is that it likes to have a warm bed in a draft-free area. Loud noises associated with city living can be disturbing to the dog.

If a Whippet is to live in the city, it should be introduced to that environment at a young age.Whippets are very good with children and are safe to have around most other animals, although they should be supervised if in the same environment as smaller animals such as rodents or rabbits. Whippets are quite easy to train and maintain. Because of their ability to interact well with children and their easy-going nature, they are excellent family pets. In some instances, however, they may be disturbed by the loud noises so often produced by small children.

Whippets are attractive dogs, with a lean build and a long head that narrows to the nose. The tail is long and thin and is carried in a relaxed rising curve. The Whippet’s ears are rather small and the inner ear is exposed due to the ear’s curling over and back. Because the ears resemble a rosebud, they are called “rose ears.” Whippets exhibit a variety of coat shades including black to white, brown, fawn, cream, red, spotted, speckled, brindled and masked. It is a shorthaired breed, and their coat is quite smooth and unyielding.People surmise that the Whippet was bred as a kind of “working man’s Greyhound.” 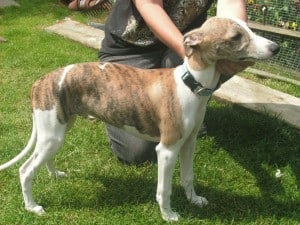 Greyhounds were very costly to maintain, and Whippets were bred to be as quick and sprightly as Greyhounds, only smaller. They were developed in England in the middle of the nineteenth century, originally for rabbit and hare coursing. The Whippet’s name came from “snapping like a whip” when going around the field hunting rabbits. Eventually, rabbit coursing was deemed too cruel to continue, and Whippets were turned toward track racing. Track racing took place on both grass and cinder tracks, although owners often preferred the cinder tracks because it enabled their dogs to reach higher speeds.

Races were a common diversion in such settings as country fairs and stadiums. Eventually, racing progressed to a straight track; one of the first environments handicapping was used. The original Whippet races took place in Lancashire, England. Since its early days, revisions have been made to the sport of hare coursing. Hare coursing continues in Great Britain and in the United States, but is illegal in Canada. 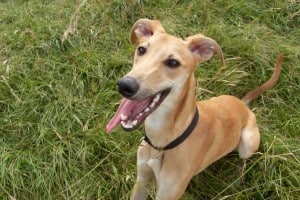 The season begins around the middle of September; however, the object of the race is no longer to kill the hare, but to measure the abilities of the Whippets against others of the breed. The hare is introduced to the grounds prior to the event, and given a chance to acclimate, but the dogs are not. Only hares in the prime of life are used. The British Kennel Club first recognized the breed in 1890.

It was inaugurated right at the turn of the century in 1899 and has since become a popular show dog.Since Whippets are a shorthaired breed, they shed very little and only need to be brushed once a week. The best instrument for grooming is a hound glove or rubber brush. They are energetic, athletic dogs and should be walked multiple times a day, and should be given an opportunity to run daily. Because they are so fast (travelling as fast as 35mph) they should always be kept on a leash outdoors and be well supervised.Health problems associated with this breed include digestive problems, mange and undescended testicles.