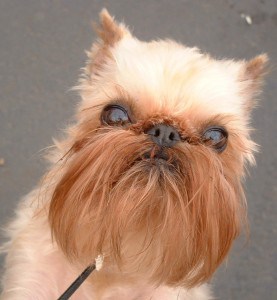 The Belgian Griffon was originally used as a ratter in stables. Later, it was bred to breeds such as the Dutch Pug, the Affenpinscher and Ruby English Toy Spaniel in order to produce the various coat textures seen today. Known for its lively, curious personality, this dog often has an interesting and amusing expression upon its face. The Belgian Griffon does quite well with other pets and does well with older children, so long as the children have helped to raise and train the Belgian Griffon.

While the Belgian Griffon makes a great watchdog, due to its natural reserve around strangers, it probably is not the best choice as a guard dog. In spite of the fact that the Belgian Griffon is a very high-energy dog, it should do quite well in an apartment so long as the dog gets enough exercise.

In spite of its tiny size, the Belgian Griffon is rather sturdy looking and solid. The Belgian Griffon is usually around seven to eight inches in height and weighing in around six to 12 pounds. The legs of the dog are straight and sturdy, the tail should be held high and the neck should be of medium length. The body as a whole should be rather square. The head, which is perhaps one of the more important features, should have a skull that is round, ears that can be either natural (natural ears are semi-erect) or docked. 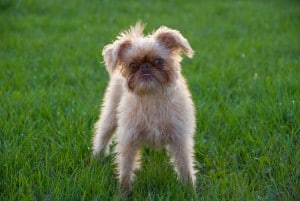 Finally, it should be noted that the Belgian Griffon tends to be prone to eye and respiratory problems The Belgian Griffon often has a hard time getting pregnant and has troubles delivering her pups. Litter sizes are rather small and usually around one to three pups and only 60% of puppies survive.