The Border Terrier is well known for its good nature. It is an incredibly intelligent dog and learns quickly. The Border Terrier will get along well with other animals, such as cats, that it essentially grows up with, but all other confrontations with small animals may result in injury or death, if not monitored. 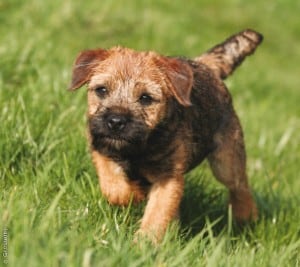 The Border Terrier will tolerate other dogs, and dog aggression is something that breeders try to keep out of their lines. This Terrier is extremely affectionate and loyal and does very well with children. The Border Terrier can adapt fairly well to a more relaxed lifestyle, but this dog was bred to roam and regular hikes, runs, and general exercise will maintain its good health. This is an overall lively and loveable dog.

The Border Terrier is generally short in stature, reaching an average height of ten to thirteen inches and weighing in between eleven and fifteen and a half pounds on average. Pet quality Border Terriers have been seen in larger sizes. It should also be noted that males are generally taller and larger than females. They have an otter like and broad head with a dark and short muzzle. They have dark hazel eyes and small V-shaped ears.

The Border Terrier has a short and dense overcoat with a wiry and somewhat broken topcoat, giving them a dense but loose covering. Their coats are described as stiff. Their coat coloration is red, blue and tan, grizzle and tan, or wheaten. The tail of the Border Terrier is short and thick at the base and they will carry it tall when alert, but may drop it when they are more at ease.

Border Terriers were bred to drive out foxes from their hiding places. At the time, shepherds and farmers needed a dog to hunt and kill the foxes when their herds were ravaged. The Border Terrier was the result; and they were small enough to follow the fox to ground, and their coat was perfect for enduring the long-term exposure to rain and mist. The Border Terrier is a Terrier who can still carry out the duties that he was bred for, three centuries later. 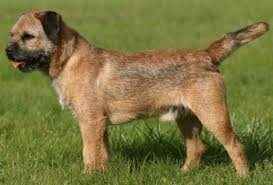 The Border Terrier should also receive good amounts of exercise to keep it in good shape. They were bred to be active dogs, and so they should be kept as active as possible. The more active the Terrier, the healthier it will be.