An excellent dog to keep in the house, the little Boston Terrier, is known among dog breeders as the “American gentleman of dogs”. It is am amazingly friendly dog, and will be very loyal to you, content to simply sit near you while you relax or watch you perform daily tasks. The Boston Terrier poses very few problems for people who choose to keep this dog in their home. 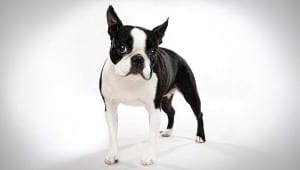 While the Boston does do quite well as an indoor dog, this breed will need substantial exercise and playtime, so having children who like playing with dogs is a plus. They’re also good for protecting your home. They’re a little too small to be considered guard dogs, but the Boston Terrier will heartily bark at any intruders, alerting you of a problem.

In all, the Boston Terrier is a wonderful little dog that is universally loved by those who have had the pleasure of owning one; and you’ll most likely adore this dog as well. This breed is very popular today all over the world.

The Boston Terrier is known as having a “tuxedo” or a color scheme on its short fur that lends itself to being described as such. A small dog, the Boston Terrier is usually not more than 17 inches tall, and usually does not weigh more than 20 pounds. It has a white muzzle, the white coloring covering most of its head and chest, with a deep black, seal, or brindle complementing the rest of it’s little body. It has large, expressive eyes with deep black pupils and a short little tail. The Boston Terrier is a very cute little dog that will thrill dog lovers of all kinds. 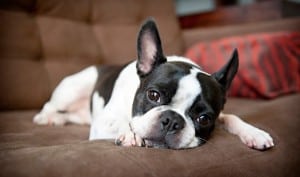 The Boston Terrier is known as being the official dog of the United States of America, having been named for that famous city in Eastern America where its breed was conceived. It was originally bred to be a house dog that would hunt rats and other household pests, but was eventually turned into more of a companion animal than a working dog, embraced by a culture that requires companionship more than a hard working canine. Its temperament has been slowly changed over the years as well, and now it is a bit more friendly than it used to be. If you are interested in getting a Boston Terrier, make sure you get one from a responsible breeder.

The Boston Terrier needs a fair amount of exercise, so make sure you exercise and play with it at least a few times a day. Boston Terriers do require a small bit of grooming, to keep their fur clean and smooth. Make sure you bathe them at least once a month.
Some breed related health concerns include Cushing’s syndrome, heart defects, patellar luxation, cataracts, deafness, breathing problems, susceptibility to heatstroke, and Demodex mange.