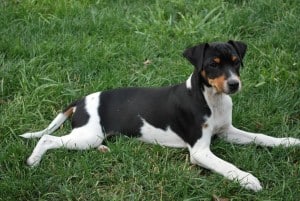 Originally bred as hunting dogs, the Brazilian Terrier is an active breed. These dogs are constantly on the move, jumping, running, and playing. Brazilian Terriers are loyal dogs, and can be easily trained and kept inside the house. Most likely, they will require a lot of training and discipline, and if you’re aiming for a calmer breed of terrier, this dog is not for you. But if it’s an active and fun task you have on hand for them, they’ll leap to do it. Its homeland is Brazil, where it is common breed, and is still used to catch rats and other common household pests.

The Brazilian Terrier prefers the thrill of the hunt to a warm lap. Its diminutive size won’t scare any burglars off, but it will make sure you know that something out of the ordinary is happening. It is amiable towards children and anyone else it is familiar with, but will most certainly not take to strangers in your house. Make sure you give your Brazilian Terrier ample time to get used to a house guest before allowing that guest to impede on your dog’s territory. They are very smart dogs, good at problem solving and figuring out how to get what they want. The Brazilian Terrier might be a bit of a handful at times, but if you can keep it under control, it will be a very rewarding little companion. 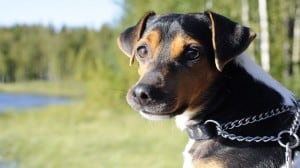 The Brazilian Terrier, also known as Fox Paulistinha and Terrier Brasileiro, is a relatively small dog, though about average when compared to many Terriers. It weighs between 15 and 20 pounds and has a sturdy structure and streamlined body that is perfect for leaping. Its limbs have been highly developed for running and jumping, and it maintains a sporty, clean-cut look with rounded edges that are pleasing to the eye.

It’s body tends to be a little on the square side, but the aforementioned rounded curves help complement this somewhat stocky look. It has a curved little tail. It is mostly white, with some black or brown spots here and there. Brazilian Terriers were bred from English and French terriers like the Jack Russell Terrier. Due to its high amount of energy and penchant for leaping and doing active tricks, the Brazilian Terrier is often used in Brazilian circuses to thrill audiences. These dogs are so energetic that they sometimes appear to be nervous. If you do not have lots of play time and exercise time to offer your Brazilian Terrier, you may want to consider a different breed.