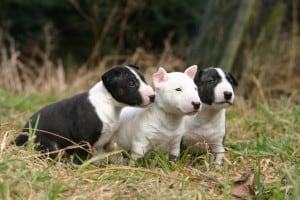 They will also jump at the chance to play outside and with other dogs. If left alone, they may develop behavior problems such as digging and chewing. Much like its larger relative the Bull Terrier, the Mini Bull Terrier can be extremely sweet, and they are more adaptable than the larger Bull. In fact, Mini Bull Terriers can live in an apartment if they are sufficiently exercised.

Loyal and obedient, Mini Bull Terriers will become attached to their owners if socialized and trained, but they are not recommended for first time owners, or dog owners who have no previous experience with Bull Terriers. They are far too active for younger children, and they do not react well to teasing and roughhousing. Male and female dogs can live together, and so can two females, though two males will probably be troublesome. 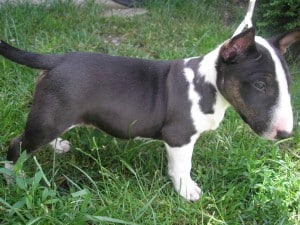 Mature Mini Bull Terriers will grow to a height of 10 to 14 inches and weigh as much as 25 to 35 pounds. They are sturdily built with a square body and odd-shaped head. Their heads are flat and slope down to their noses. Its eyes are dark and small almonds, which are set very close. Their coats are short, close and glossy. They come in all colors, the most common being white and brindle. Other common colors are black, red, fawn and tri-color. The body is full and round, while the shoulders are robust and muscular and the tail is carried horizontally.

Bull Terriers are easy to groom; only needing a weekly brushing and combing. They are average shedders. They will also need lots of exercise and attention. Overall, they are very healthy dogs, but some suffer from zinc deficiency and some pups are born deaf.