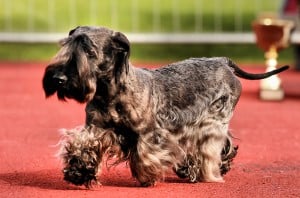 The Cesky Terrier is a small terrier that was originally bred for hunting. Descended from the Scottish terrier and the Sealyham Terrier, this breed is an attempt at combing desirable traits from both breeds to create a small tough hunting dog.

The Cesky Terrier, also known as Cesky, Czech Terrier, Czesky Terrier, Bohemian Terrier, is a friendly dog that usually gets along well with children and other dogs. Though they are not yappy dogs, they do make excellent watchdogs in that they will alert the house if someone they are unfamiliar with approaches them and they do not have the comfort of an owner around them.

Part of what makes the Cesky Terrier such as excellent consideration for a pet is its ability to adapt. This terrier makes an excellent pet for both apartment as well as farm life. They make excellent pets for the single person home or for the active family. The Cesky Terrier is easy to obedience train and like most terriers will work best with positive reinforcement as opposed to heavy correction. 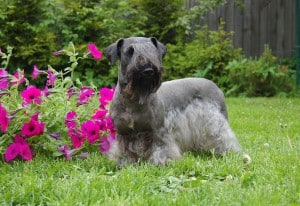 The Cesky also learns well when kennel trained. If trained to live in its kennel early on the Cesky will learn to eat, sleep, and travel easily within its kennel. With the proper amount of care and love the Cesky Terrier makes a wonderful pet for almost anyone in any situation.

The Cesky Terrier is smaller than most other terriers. They are longer in the body than they are in the legs and generally attain a height of 10 to 12 inches, weighing 13 to 20 pounds in adulthood. This terrier is sturdily built with muscular legs and a powerful body. Their tails are seven to eight inches in length and their expressive faces are hard to forget. Upon their long head are high set drop ears and a full beard and eyebrows.

The Cesky Terrier’s soft non-shedding coat comes in two different colors. One form is blue gray in which the color of the coat can vary from charcoal to almost platinum in color. These Ceskys have a black nose and dark brown eyes. The other form is brown. These Ceskys have brown pigment and their eyes are a golden color. 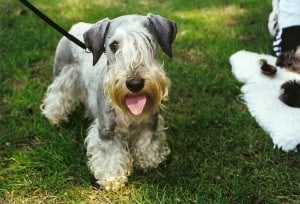 The Cesky Terrier was developed by Frantisek Horak, a geneticist in Czechoslovakia in 1949. He crossed a Scottish Terrier with a Sealyham Terrier in the attempts of creating a breed that was small enough to ground but tough enough to take care of itself when faced with the sometimes-aggressive animals it would be dealing with. After a lot of work with these dogs Horak finally had what he wanted and by 1963 he had achieved recognition for the Cesky Terrier.

A Cesky Terrier’s coat should be combed out at least once a week and bathed every three to four weeks using a mild dog shampoo. Every two to three months trimming of the coat should be done and nails should be trimmed once a month. Trim the hair between the Cesky’s footpads regularly as well in order to prevent build up and consult your vet on how to remove hair from the ears. The Cesky Terrier can develop hereditary eye problems and an improper diet that leads to obesity can also lead to back problems. With proper care and diet the latter can be avoided.