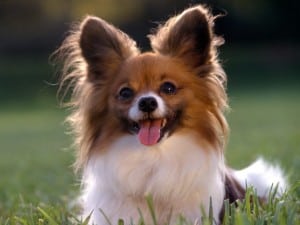 Having a fenced backyard with a doggie door helps. Regardless, the Continental Toy Spaniel is a really loyal dog that is friendly to people it knows well. It’s best to have this as your only dog, given its tendency to resent the presence of other dogs. If you need to have more than one, most Toy Spaniel’s will eventually get used to the new dog. They like to exercise, but can be kept inside for a few days at a time without any major problems. 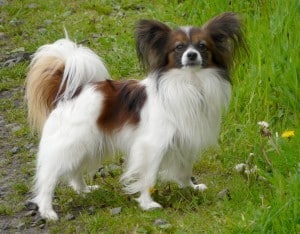 They do best as indoor dogs, but they do need to be taken out for a stretch every now and then. They have a luxurious, silky coat that needs to be brushed, but is not prone to tangling. You will need to bathe them, and occasionally have their teeth cleaned. Overall, the Continental Toy Spaniel can be a handful at times but is a loyal, loving, and fun little dog.

A small little dog, the Continental Toy Spaniel is never more than 11 inches tall and 10 pounds at the maximum. They have silky white coats, and are usually covered in patches of multiple colors, creating a sort of patchwork look with the predominant white shining through. They have “butterfly” shaped ears, with a small kink in the middle of the ear. The distinguishing feature between the traditional Papillon and the Phalene variety is their ears. Those of the traditional Papillon are erect while the Phalene’s are hanging. 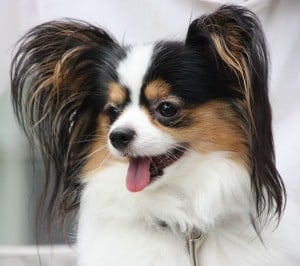 The Continental Toy Spaniel has been bred for over 700 years now, with origins in Europe and Italy. You can even find Toy Spaniels in some famous paintings from the 13th or 14th century in Italy – they are common characters in Italian frescoes and other works of art!

Because of their long coats, these dogs can require lots of grooming. Continental Spaniels are quite prone to knee problems; the patella in the hind legs often requires surgical correction. Also, these dogs do not do well under anesthesia and often have fontanels, or soft spots, on their skulls which need protection.