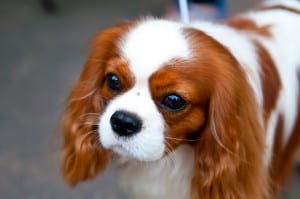 However, they will bark when an unfamiliar person approaches, making them okay watchdogs. English Toy Spaniels are very affectionate, even towards strangers. They do well with other animals and children, provided the kids don’t play too roughly. The English Toy Spaniel is intelligent and easy to train, provided training is accompanied by praise.

The English Toy Spaniel is quite small, reaching about 11 inches in height and weighing between 8 and 14 pounds. They have a long, silky coat, which can be either straight or wavy. There are four varieties of the breed: the Blenheim, with a white coat and chestnut patches; the Prince Charles, with a white, tan and black coat; the King Charles, with a shiny black and mahogany coat; and the Ruby, which is a solid, rich mahogany red. The English Toy Spaniel’s nose is pink at birth and turns black later in life.

The English Toy Spaniel should be brushed twice a week. They require very little exercise and are content with short walks, although they do enjoy chasing and catching dogs.Some common health problems associated with the English Toy Spaniel include patellar luxation, heart disease, umbilical hernia, ear infections and cataracts.