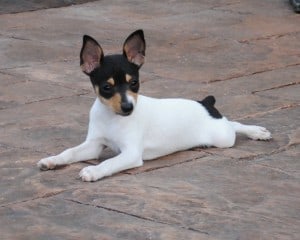 As its name might suggest the Toy Fox Terrier is a very small dog, that is also known as the American Toy Terrier, or Amertoy. Despite its small size, it makes an excellent watchdog, as it can be very protective.Toy Fox Terriers are good dogs to have in a small dwelling such as an apartment because they are so small. However, they should not be around very small children.

They may also not be comfortable around strangers and for this reason may be best suited as the companion of a single person or family. While small breeds such as the Toy Fox Terrier are often considered “yappy dogs,” they only bark when in the presence of something they are not comfortable with (i.e. strangers).

Toy Fox Terriers tend to think they are far larger dogs than they actually are. They are very curious and energetic and can be extremely stubborn. However, they are also very intelligent and can be quite friendly. They make excellent companions and can be trained as assistive animals. They make very good hearing dogs for the deaf, as they are more than able and willing to lead their master to the source of any noise. 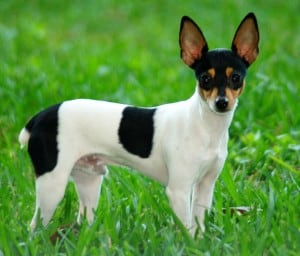 Toy Fox Terriers cannot be exposed to cold weather. If necessary, they should wear a coat to maintain their warmth. Toy Fox Terriers make excellent pets. Because of their somewhat aggressive tendencies, Toy Fox Terriers should begin obedience training very early to ensure the dog does not get into fights with other animals.The average Toy Fox Terrier should weight between three and a half to seven pounds, and should measure about a fiit in height. The Toy Fox Terrier comes in four acceptable colors.

The Toy Fox Terrier should be brushed weekly and bathed from time to time. While Toy Fox Terriers are quite capable of amusing themselves and fulfilling their exercise needs by running around the house, they still should be walked several times a day. They should be played with daily as well.While health problems associated with the Toy Fox Terrier are rare, they can be prone to patellar luxation, legg calve pethes and stifle. Some food allergies also exist, including allergies to beet pulp, corn and wheat.