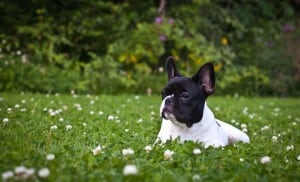 The French Bulldog makes an exceptional pet for those people who are looking to invest a little time into a very affectionate animal. The French Bulldog tends to latch in to a single person and devote all of the love they have to them, making them excellent companions for those living alone and the elderly. They are fairly adaptable and do very well in apartment life. The French Bill dog does not require a lot of exercise, which may make them more appealing for those living in cities.

Their easy going temperament and high intelligence makes them easy dogs to train, with the proper obedience training at an early age. The French Bulldog tolerates strangers fairly well but can also make an excellent watchdog. This dog gets along fairly well with children as long as they are not too rambunctious or rough. As far as other pets, they can be animal aggressive unless socialized early in life. If they are introduced at an early age, the French Bulldog and other dogs should get along wonderfully.

If well socialized, the French Bulldog will usually get along well with other animals, although they will display jealousy over an owner giving too much attention to another dog. All in all French Bulldogs are wonderful companion animals but they do require a considerate owner due to their particular idiosyncrasies.

The French Bulldog is not a large dog by any means, reaching an average height of 10 to 12 inches and weighing somewhere between 18 and 28 pounds. They have a well-structured, compact and muscular body that is very evenly proportioned. Their body is pear shaped, being wider in the shoulders and tapering in the rear. There are several different body styles from long and low to a more terrier-like type with a lot of leg, and shorter back. 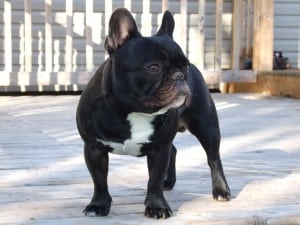 They have short legs, with the hind legs longer than the forelegs and all four are very muscular. Their tail is either straight or screwed, but it should not be curly. They have round and dark eyes set apart on a large, square head. Their most distinguishing feature from their cousin the English Bulldog, is their characteristic bat ears. These ears are elongated, set high on the head, broad at the base and round at the tip.

The French Bulldog has a round forehead and a flat skull with very prominent wrinkles at the stop. They have a broad jaw and a very distinct under bite that gives them such an endearing quality. The coat of the French Bulldog is fine, very smooth and short and there are more wrinkles at the head and shoulders. Coat color is often brindle, brindle and white, fawn or all white.

The French Bulldog was developed in the 19th century in England, as a miniature version of the English Bulldog. It was a cross between these dogs and French Terriers in France that gives us the breed as we see it today. There was uproar in England when the dog came back for exhibition under the name French Bulldog. There had always been a certain feeling of the Bulldog being a symbol of English culture, up to this point. Breeding programs in the United States have kept the characteristic bat ears in the breed. 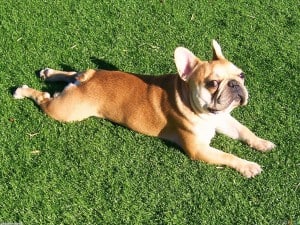 The ears and skin between the facial wrinkles of the French Bulldog should be cleaned two or three times a week and the dog should receive weekly brushings. This breed cannot swim and needs to be watched around water.

Breed related health concerns are elongated palate and stenosed nares (breathing problems) luxating patellas, eye-related problems, hemivertebraea, dysplasia, cancer, atopy and susceptibility to heat stroke. It is important that this breed be kept in an air-conditioned environment if they are to live in warmer climates.

Some French Bulldogs are not good swimmers and care should be taken around water.Many do not have normal heat cycles and need progesterone testing to determine when ovulation occurs. They are frequently artificially inseminated, and usually in the USA delivered by Cesarean sections. C-sections are often necessary in the French Bulldog.