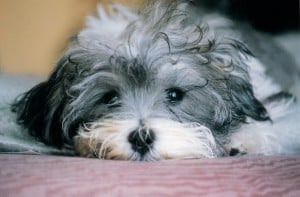 The Havanese developed in Spain and Italy in the 17th century. They are related to the Bolognese and the Maltese, which originated in the Mediterranean during the Middle Ages.The Havanese, also known as the Bichon Havanais or Havana Silk Dog, is a friendly, companionable dog. Like most breeds bred to be companion dogs, the Havanese is affectionate and enjoys being around people. It is a good dog for the inexperienced dog owner. Unfortunately, it is quite rare and it can be difficult to find a puppy. Considered by many to be the “most delightful” of the smaller breeds, the Havanese is affectionate and intelligent.

They love attention and have a “show-off” nature, making them playful and amusing. Havanese adores all people, including children, and can do well with other animals. Havanese is easy to train and is not aggressive, making them good dogs for families that have never owned a dog before. They are not at all noisy, and their small size makes them good dogs to keep in an apartment or similar confined dwelling.

The Havanese is rather small, rarely exceeding 11 inches in height and weighing between 7 and 14 pounds. They have a soft, thick double coat, which reaches six to seven inches in length and is quite thick. It can take up to four years for the Havanese’s coat to reach full length and thickness. The hair on a Havanese’s forehead often forms a curtain in front of the face and so is often held back with a rubberband. The tail is covered in long, silky hair. When the dog is at rest, the tail blends with the rest of the coat. One of the distinguishing features of the Havanese is the fact that all coat colors are possible.

The Havanese was imported to Cuba early in its history by Italian sailors and is today the most popular companion dog in Cuba. However, its popularity was not without hardship. Cuba’s communist revolution in the late 1950s all but destroyed the breed. Fortunately, three families fled Cuba taking their dogs with them. Two of these families retreated to the United States and one to Costa Rica. By 1974, the breed was increasing in numbers. 11 dogs from the three different breeders were gathered to start a breeding program. 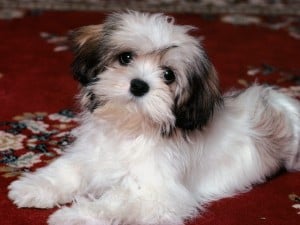 Today, although the breed is still quite rare, it is gaining in popularity in the United States and the rest of the world. The Havanese was recognized by the Federacion Cinologica de Cuba in 1963 and has been admitted to the Toy Groups of various international and American kennel clubs more recently. Today, there are about 4000 Havanese in the United States and 7000 more in the rest of the world.

The Havanese should be brushed daily. Otherwise, its thick coat is likely to mat. It should be walked and played with daily. However, the walks should be slow-paced and the playtime somewhat low key.Some common health problems that are associated with the Havanese breed include cataracts, patellar luxation, and progressive retinal atrophy, ear infections and dry skin.