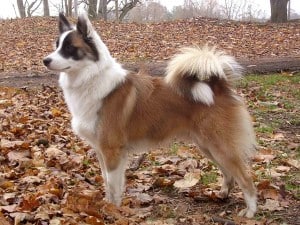 Iceland was originally home to many varieties of dogs, which have over time coalesced into today’s Icelandic Sheepdog. They are likely related to the Norwegian Buhund and the Greenland Husky, and were instrumental in the breeding of British herd dogs.The Icelandic Sheepdog is a relatively non-aggressive dog that is slightly smaller than average. They adore the company of children and make good watchdogs, as they will bark at unfamiliar happenings. However, they don’t normally bite. The Icelandic Sheepdog us easily trained.

They actually prefer the companionship of children to that of adults and so make great family pets. They are not at all aggressive, although they will bark at strangers. This makes them great watchdogs, alerting their family to potential danger without causing harm to false threats. Their natural herding instincts do give them the tendency to bark at running animals, but they are good with other pets. Icelandic Sheepdogs especially enjoy the company of horses. In Iceland, the breed is still primarily a working dog, herding sheep and rounding up horses.

They do well in obedience and agility training. Because the Icelandic Sheepdog so loves its family, they are happiest when around people. Although they can do okay if left alone for a couple of hours, they are much happier with companions and should not be left alone for an extended period of time. Icelandic Sheepdogs require a significant amount of exercise, but not as much as many other working breeds. They are calm indoors and can do fine if one daily walk is skipped.

There are two varieties of Icelandic Sheepdog, the shorthaired and the longhaired. Both varieties reach between 16 and 20 inches in height and weigh around 25 pounds. They have thick, water repellant coats, which insulate them from cold weather. Both varieties also have a thick undercoat. Common coat colors of the Icelandic Sheepdog include yellow or reddish with white markings, although gray, black and silver are possible as well. They have erect ears and a bushy tail that is carried over the back. 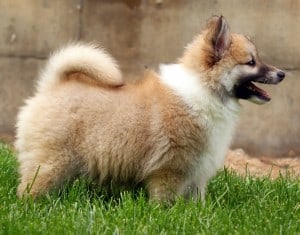 Most of the dogs were crossbreeds. In the 30s, 40s and 50s an Englishman by the name of Mark Watson traveled to remote areas of Iceland to find the purest dogs possible. He then established a kennel in California, which later burnt down killing most of the dogs. However, a couple of his dogs had remained in Iceland and were used to reestablish the breed. The breed was recognized as early as 1898, and in 1970 natives of Iceland established a club to propagate the breed.