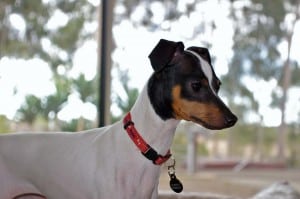 The Japanese Terrier was originally bred for hunting vermin. They were created by mating Smooth Fox Terriers to small-sized pointers and/or small-sized (Japanese) native dogs. Over time, owners began keeping them as lap-dogs.Also known as the “Nihon Teria,” the Japanese Terrier is a medium-sized companion dog found commonly in Japan. They are lively and cheerful dogs that have taken on a new role as a housedog.

The Japanese Terrier is intelligent, affectionate, and very playful. They are also very clean dogs, which will rarely track dirt or stains into your house. They enjoy games and play, making them ideal for households with children. They are loyal and eager to please their owners, as companions and as watchdogs. Japanese Terriers are extremely easy to train and love to learn tricks. As a sporting terrier, they have great instincts, an excellent sense of smell, and remarkable eyesight. They are well-built, sturdy and able-bodied dogs.

Its coat color is jet-black and rich tan, with reddish-brown marks. They are arranged as follows: a small tan spot on each cheek and above each eye (in many cases), the ears and the rest of the head should be black, while the body should be mainly white. Japanese Terriers do not need a great deal of exercise. In good weather situations, they are lively and vigorous. 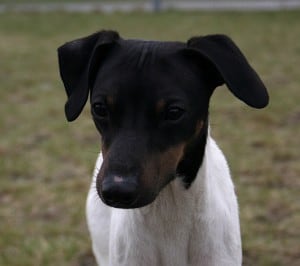 They love the sun, but should not be exposed to it for prolonged periods of time. They are also sensitive to the cold, and will need warm spots to sleep in over the winter months (an electric blanket works fine) and sweaters if you are taking them for a walk. They are an adaptable breed, well suited for most climates and both city and rural living.

As its name might suggest the Japanese Terrier originated in Japan. It is believed that ancestors of this breed were first developed in the Edo era (in the early 1700s). This breed then became the Kobe Terrier, which was seen commonly in the Meiji era (in the early 1900s). This was the first true Terrier originating in Japan. Today’s Japanese Terrier became popular in 1940 and is still common today.