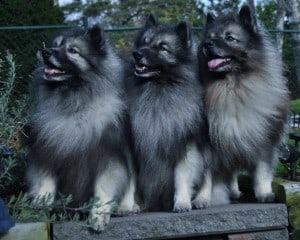 The Keeshond originated in Antarctica, thought it was further developed in Holland. It is a Spitz-type dog that became very popular in the Netherlands.The Keeshond is a moderately sized dog that not only makes a great pet but is also an adept watchdog. They are intelligent and trainable. The Keeshond is bred to be intelligent and friendly. They bond well with members of their family and do well with children and other animals if socialized with them at a young age. They are very loyal and protective, making them excellent watchdogs.

They are not the best guard dogs, however, since the Keeshond is not an attack dog, nor has it been bred or trained to attack. Its function on the barges of Holland was to watch over the barge and warn the occupants of danger. The breed is a good companion dog, wonderful with children, and as a general rule they do not bite unless attacked by another animal. They do not do well if they are not in the home with their family. 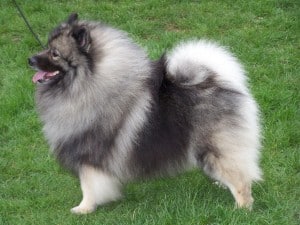 The average height for the Keeshond is 18 inches for males, with females being slightly smaller at 17 inches on average. An inch up or down is acceptable on either sex in the show ring. They have a thick gray, black, and cream coat that stands away from the body. Other colors are possible, including pure black and white and combinations of other colors including orange, brown, and red. Great controversy exists over whether these “other colored” dogs are true Keeshonden. Devotees of the breed are fighting to gain recognition for dogs whose color does not match the norm.

The Keeshond was a very popular family pet in the 18th century, as well as being used as watchdogs on canal barges. They would bark when people approached the barges, and also let them know of boats on the water, how far they were from their barge, when a boat was too close to them. Keeshonden were known as “barge dogs” because of this use. Keeshonden were bred to be in small spaces. Surprisingly Keeshonden are somewhat rare in Holland today, due to political reasons. 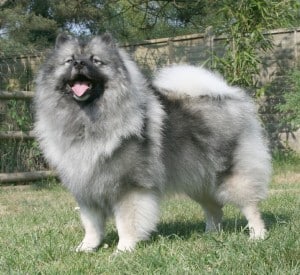 The Keeshond was the symbol of the Dutch Patriot party, which was unsuccessful in the overthrow of the reigning House of Orange, which still rules the Netherlands today. In spite of this there are still Keeshonden in the Netherlands. The majority, however, can be found in Great Britain and the United States, with other Keeshond clubs worldwide.

Keeshonden may be prone to dry skin, which may be mistaken for allergies. Using conditioners may help this condition. When bathing warmer water may irritate skin, use coldish water but not too cold, then brush dry with soft bristles, do not use heat to dry such as a blow dryer. If symptoms persist consult a vet.