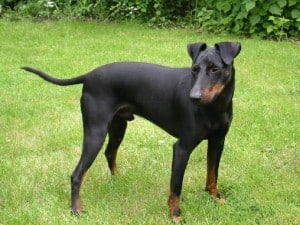 The Manchester Terrier was originally bred to track small game and control vermin, such as rats, in the 1800s.The Toy Manchester Terrier, also known as the “Gentleman’s Terrier,” is a high-spirited, intelligent, and crafty dog. He is very lively, sporty, alert, and very aware of his surroundings. It is a loyal friend, and will always be good to his master. Toy Manchester Terriers love children, and will get along with other animals if introduced to them at a young age. It is important that training begin at a young age. It is equally important that their training be done with consistency and love.

The Manchester Terrier needs plenty of exercise such as walks, and time to run and play off of the leash. They are fast runners and have great endurance to match. They should not be allowed to run without a leash, because they love to chase and their natural instincts may takeover. Toy Manchester Terriers are affectionate with their families but normally will shy away from strangers and may become agitated if one messes with their food bowl. 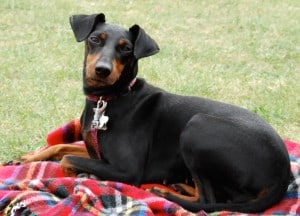 They will usually have black patches on their wrist areas and narrow black stripes on their toes. Their ears are v-shaped, and must be naturally erect, they cannot be cropped. Cropping is a disqualification in the show ring for Toy dogs. Their small eyes are shaped like almonds and dark. Their short tails are pointed.Though the Toy Manchester Terrier is primarily a companion dog, it was originally bred as, and can still serve as a rodent killer.