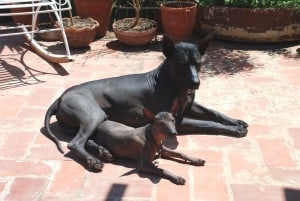 The Xoloitzcuintli has an extraordinarily rich and ancient history. Archaeologists have dated bones found back to 3,300 years ago. It is one of the few breeds that has traversed thousands of years and come out nearly unscathed by crossbreeding. The Xoloitzcuintli is an extremely rare breed also known as the Mexican Hairless and Tepeizeuintli.

While very rare, Standard Mexican Hairless dogs are kept as companions, they are affectionate, energetic and lovable dogs. They are usually easy to train, partially because they become very attached to their owners and strive to please him. Members of the breed have actually won several international obedience trials. The Xoloitzcuintli is a very agile, energetic dog. They feel quite hot to the touch.

This is not because the body temperature of the dog is abnormally high, as many people think. Rather, the Xoloitzcuintli’s body temperature is on par with other dogs (between 35 and 39 degrees Celsius) but, while most other breeds have hair to insulate their body heat, the Xoloitzcuintli has none. Because this breed feels so warm, they have long been used to warm their master’s beds. It is also thought that the dog can work like a heat pad to cue rheumatism and other aches and pains.

The ancient Aztecs of Mexico worshiped the Xoloitzcuintli. In fact, the very name Xoloitzcuintli comes from compounding two Aztec words, Xolo and itzcuintli. Xolo was the God of things deformed and was depicted in ancient art as a dog with deformed hands and feet. It was thought Xolo also acted as a companion to the Land of the Spirits after death. Itzcuintli means “dog” in Nahuatl, the ancient language of the Aztecs, and so the name of the breed means “dog of the god Xolo.” 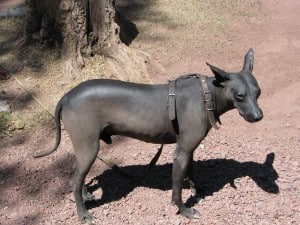 It is these dogs that were thought to lead people to the spirits. Despite the long history of the Xoloitzcuintli, in its native Mexico most people think they have become extinct. This is not the fact, although the dog remains quite rare. Many celebrities keep Xoloitzcuintlis as pets because they are so rare that it is considered a status symbol to keep them. Diego Rivera and Frida Kahlo, famous Mexican painters, kept xoloitzcuintlis.

The Xoloitzcuintli can withstand extremely hot or normal temperatures with ease. However, it should be kept out of prolonged contact with extremely cold temperatures because it has no insulating hair. If exposure to cold climates is absolutely necessary, it should wear a sweater or coat.The Xoloitzcuintli should be allowed to play outside off the leash often, especially if he may be exposed to cold temperatures. Playing in the cold will keep him warm and also allow his body to become acclimated to the colder weather.

The skin of the Xoloitzcuintli can become dry and chapped easily. It is necessary to oil the dog, especially after exposure to water such as bathing. The best oils to use are almond oil or other edible oils. The Xoloitzcuintli should be rubbed with sun block before exposure to sun because he will burn.Many Xoloitzuintlis do not have a full set of teeth, although front teeth and molars are almost always present. When feeding Xoloitzcuintlis that do not have all their teeth, be sure to feed them small chunks or ground foods.