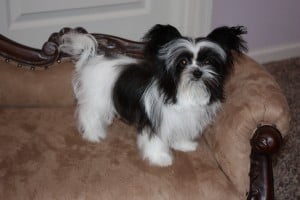 Toy Mi-Kis were first bred in the 1980’s and became officially recognized in the United States in 1995. This breed is closely related to Papillons, Maltese, and Japanese Chin Dogs although their ancestry is obscure. They remain quite rare.

Seemingly the perfect pet for people with allergies living in small spaces, the Toy Mi-Ki has a long coat and does not shed. They are quiet and affectionate, and seem to be a great choice for city dwelling dog lovers. Toy Mi-Kis are not usually noisy or yappy and make a great family dog. Despite their small size, Toy Mi-Kis love to play and are quite agile.

Owners often describe the habits of their Toy Mi-Kis as “feline” – the dogs love to sun themselves on warm windowsills and will wash their faces with their paws! They also tend to get along with other dogs and are very affectionate toward their owners. Because of their calm, even temperaments, Toy Mi-Kis have even been used as therapy dogs. They are fairly accepting of strangers and are certainly not shy dogs.

Mi-Kis are quite smart and can be trained to use a litter box, although they love to go outside for long walks. They can also be trained to perform a wide variety of tasks or tricks. Despite their long-coated appearance, they are easy to maintenance and will only need brushing once a week with a wire comb! Toy Mi-Kis live up into their teen years and make great little companion dogs. 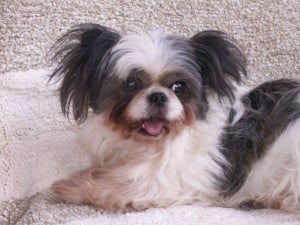 Toy Mi-Kis have both smooth or long coats, although the smooth coated type is rare. Solid colored Mi-Kis are also rare; most have two-tone coloration or coloring similar to a Papillon. Their heads have apple-domed shapes, and the long haired Mi-Ki type often has a moustache and beard! Their dark, round eyes often have dark eye rims, although in light colored dogs they will be self-colored, as are the noses. The nose should never be pink! One of the most expressive and lovely aspects of the Mi-Ki is its mobile ears!

These are feathered and may be carried alert or drooping. When excited, some Toy Mi-Kis are known to wave their ears! All Mi-Kis, whether short or longhaired, have feathered legs, although in the short coat it is more of a fringing. The short coat type has smooth hair lying close to the body, while the long type has silky, straight, fine hair.

The tail of the Toy Mi-Ki is carried high in the air and is feathered. It is set high on the body and curves over the back in a slight arc. Toy Mi-Kis usually stand ten and a half inches at the shoulder and weigh around ten pounds. Generally, Toy Mi-Kis bodies are slightly longer than their height, and their backs are level and straight. Mi-Kis also have straight legs and their feet are extremely dainty, often described as “hare-like.”

Toy Mi-Kis are susceptible to respiratory problems and need their teeth cleaned more often than longer-muzzled dogs. The long hair between the Mi-Ki’s toes often traps dirt and causes the dog problems. Keeping the feet shaved is a common practice, which prevents this. The feet are usually shaved from the pads all the way up the leg to the Mi-Ki’s pastern, including its dewclaw. In the show cut, both the legs and the head all the way to the base of the skull and throat are shorn! This includes the head, neck and ears.