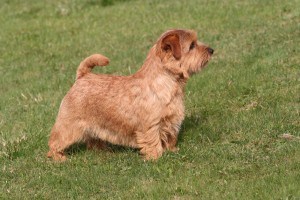 Originating in England in the 19th century, the Norfolk Terrier was bred for hunting. Particularly to ‘bolt” foxes in foxhunts and to hunt rats. It was not until later that they became popular as companion pets.The Norfolk Terrier is best described as a ‘large dog in a small package’. This fearless creature could be for you if you are looking for a companion that can keep up with you in your active life. The Norfolk Terrier, also known simply as ‘Norfolk’, is a gregarious, high-spirited dog whose personality matches that of a much larger dog.

The Norfolk is courageous, sturdy, active, high-spirited, and even-tempered. In spite of its high-spirited nature, the Norfolk terrier is an affectionate loving dog. Lacking the quarrelsomeness and nervousness of some other terrier breeds, this canine would make a great addition to any terrier lover’s home. Because the Norfolk is a terrier, those not already familiar with the unique terrier personalities must be aware that these highly intelligent dogs need early obedience training and socialization. Luckily for their owners, this dog is quite easy to train. The Norfolk Terrier’s temperament can best be described as ‘sporting’. Bred for working, these little dogs have a great lust for life. Their zest for life is only matched by their love of people. 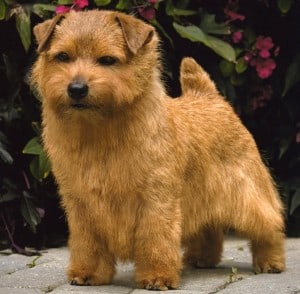 For these reasons the Norfolk Terrier needs regular exercise and should not be left alone for long periods of time. Failure to do the above may result in destructive and/or annoying behavior such as digging and barking. Because Norfolk Terriers were bred for chasing and ferreting out small animals it is advised to never walk your Norfolk off the leash. His natural instincts tell him to run off after other creatures, and this could be a danger to him.

The Norfolk terrier is good with other pets and children, particularly if well socialized when young. They are playful and take great love in toys and games. The Norfolk can sometimes be difficult to housetrain and this is something to bear in mind before decided to purchase a Norfolk. The Norfolk will do well in both apartment and country living, though if raised in an apartment he should be given daily exercise.

The Norfolk is a small dog usually reaching no more than ten inches (25cm) and weighing an average of ten to twelve pounds (4-5kg). Their coat is straight, short, and wiry with a shorter undercoat. The outercoat is typically seen in a range of colors including wheaten, black and tan, grizzle, and all shades of red. Like most terriers the Norfolk has a sturdy, compact and muscular body. He is a strong dog with thickly boned legs. 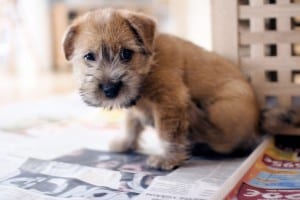 His expressive face features a fox-like muzzle. His eyes are communicative and dark. Atop his head lie two cute, triangular, dropped ears, which lie against his face. His tail is docked halfway and should point upward.The Norfolk Terrier and the Norwich Terrier were initially considered one breed, until 1979 when they were recognized as distinct breeds.