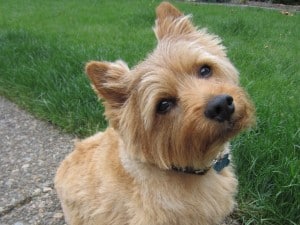 Norwich Terriers are quite friendly and get along with everyone, including children. They also are friendly towards strangers, although they will bark when someone unfamiliar approaches. This trait makes them good watchdogs. The Norwich Terrier is also friendly towards other animals in the family, provided they are socialized at a young age. However, they do tend to chase unfamiliar cats and other small animals and so should not be allowed off the leash except in secured areas. 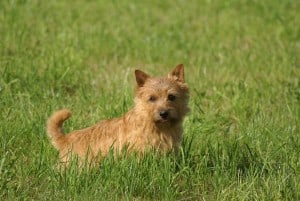 Norwich Terriers are affectionate, loyal and brave animals that are not at all shy. They can be noisy and destructive if neglected, so they should be in the company of family as much as possible. Norwich Terriers love to play and are always eager to join in a game of fetch.The smallest of all the terriers, the Norwich Terrier rarely exceeds 10 inches in height and weighs between 10 and 12 pounds. Their body is quite sturdy and somewhat rounder then that of its more angular relative, the Norfolk Terrier.

Norwich Terriers have a straight, coarse coat that usually appears in shades of red, tan, or black and tan with or without white markings. They have strong legs and a muzzle that resembles a fox’s. Their faces have bushy eyebrows and beards.The Norwich Terrier once belonged to the same breed as the Norfolk Terrier. Both breeds descended from Irish, Border and Cairn terriers in the 1800s. The dogs were used initially to rid English farms, homes and factories of vermin, although they came to be used to hunt foxes as well. 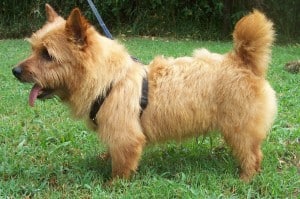 It was not until the 1930s that the two breeds began to become distinct. The Norwich Terrier developed a rounder body and more easy-going temperament, as well as the distinctive prick ears that truly distinguish the breed. In 1964, the two breeds were officially separated in England. The American Kennel Club followed in 1979, recognizing the Norfolk and Norwich Terriers as distinctly different breeds.

The Norwich Terrier should be groomed biweekly and trimmed biannually. They should be given a couple of long walks or short jogs daily, although if a day is missed the dog will be okay. They should not be left alone outside, as they will become destructive.Although a fairly healthy dog, some common health problems associated with the Norwich Terrier are summer eczema, back problems and genetic eye diseases.