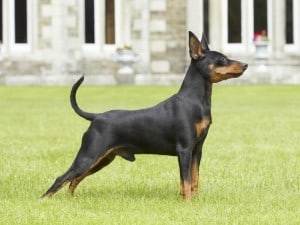 The Miniature Pinscher is not, as many people assume, a smaller version of the Doberman Pinscher. In German, “pinscher” means “biter,” and the German family of Pinschers is so named because of their means of approaching prey which is to jump on it and bite furiously.The Miniature Pinscher, or “Minpin,” as it is known by aficionados of the breed, is a boisterous, stubborn, tiny dog that makes a good pet for experienced adult owners with lots of patience. Within-breed differences are great, meaning that while some Minpins make excellent companions for children, others are quite aggressive.

The Minpin is often aggressive towards other animals and strangers. Some Minpins are quite stubborn, however, most Minpins are responsive to obedience training once they learn that they’re not going to get out of it. Minpins attempt to rule the home, despite their diminutive size, and so must be trained to sit, come when called, and walk on leash. Many Minpins also bark excessively, especially when strangers approach, a trait that can be alleviated by patient training. 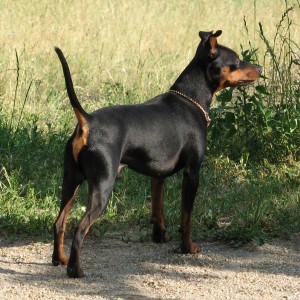 Miniature Pinschers have a great sense of humor. They will often misbehave to elicit a response of laughter. Minpins also have a tendency to steal anything that’s not nailed down, so in a home where a Minpin lives it is necessary to keep anything that’s small enough to steal or choke on out of reach. The Minpin is an excellent escape artist. They should not be allowed out of the yard except on a leash or while being carried, and the yard in which they play should either have a roof or very high fences.

Minpins are very small, making them good dogs for apartment living. Small dogs are a favorite of backyard breeders because one can breed many animals in a small space. Dogs bred in this manner, such as those often found at pet stores, may have behavior problems and uncontrolled urinating and defecating. For this reason, it is essential to acquire a Minpin from a reputable breeder.

Minpins are very small animals, rarely exceeding a foot in height. They are elegant looking dogs with a lean yet strong body. They have a smooth, straight, hard coat that usually appears in shades of red, black and rust or chocolate and rust. Some small white markings are acceptable. The body of a Miniature Pinscher is usually square, although females may be slightly longer than they are tall. Minpins have a high-stepping walk, which adds to their overall elegance. 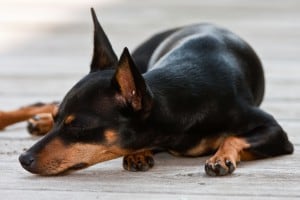 The Minpin originated in Germany in the 18th century and is likely descended from the German Pinscher mixed with such diverse breeds as the Dachshund and the Italian Greyhound. Miniature Pinschers were originally used to control vermin in homes, shops, factories and farms. Today, however, they are primarily kept as house pets.

The Miniature Pinscher requires little grooming. A weekly brushing is all that is necessary to keep its coat in top form. Its teeth should also be cleaned regularly and its nails should be kept trimmed. Frequent bathing is unnecessary and can actually dry the skin of the Minpin. Instead, they should be wiped down with a damp washcloth when dirty.Some common health problems associated with the Miniature Pinscher include skin problems, progressive retinal atrophy, and Legg-Perthes disease.