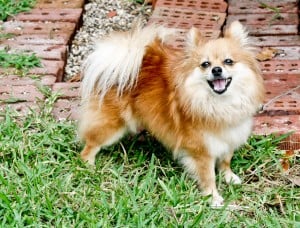 They do well in obedience training and are a good pet for adult households. Pomeranians do quite well in obedience training, which is necessary to keep the little dogs from being destructive and barking excessively. Pomeranians are generally unfriendly towards strangers and may not bond to all members of the family. It is best for a Pomeranian to be the pet of an adult or a family with older, gentle children. 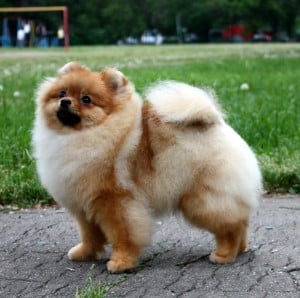 The Pomeranian, also known as the Pom, Dwarf Spitz, or Loulou, can be quite protective of things that it considers his, such as toys and food bowls. They can be socialized to other animals, although they may try to dominate other dogs. Pomeranians do well in apartments because of their small size. They are very energetic and strong, despite their fragile appearance. Poms are affectionate to their family but may bark at strangers. The Pomeranian’s self-confidence is very high.

The Pomeranian is the smallest of the Spitz group of dogs, reaching a maximum of 11 inches in height and rarely weighing more than seven pounds. They have a thick, straight, coarse outercoat and a soft, dense undercoat. Common coat colors of the Pomeranian include red, orange, sable, black, blue, brown, cream, particolor, and sable/black with tan markings. The Pomeranian’s tail curls forward and it has small, erect, fox-like ears. 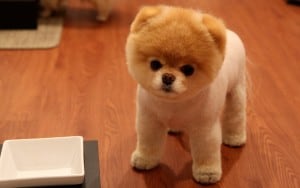 The Pomeranian was brought to Britain in the 1880s, after which they became a favorite of the royal family. Queen Victoria first became aware of the breed while in Florence in 1883, and she became quite fond of them. She established a Pomeranian kennel in England, and in 1891 six Pomeranians from the royal kennels were shown at Crufts Dog Show, where they all won prizes. The American Pomeranian Club held its first show in 1911.

Although their luxurious coat makes it seem that the Pomeranian requires extensive grooming, this is not the case. Biweekly brushing and quarterly trimming is sufficient. They do not need much exercise, making them good pets for apartment living.Some common health problems associated with the Pomeranian are undescended testicles, tracheal collapse, patella luxation, patent ductus arteriosus, tooth and gum disease, and progressive retinal atrophy.