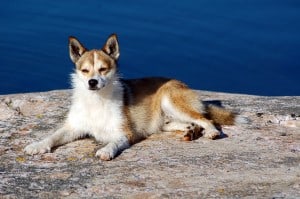 They adore playing and will gladly fetch balls, play tug of war or engage in any other came for countless hours. They love their family, however, and will become bored with any toy if left alone with it. They have an instinctive tendency to hide things such as toys and food for later use. Norwegian Puffin Dogs can be difficult to housebreak and somewhat hard to train because of their independent nature. However, obedience training is possible if the handler is patient and training begins early. 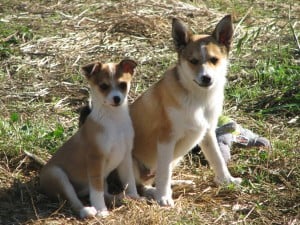 The Norwegian Puffin Dog does well with children and other animals, especially if socialized at a young age. They enjoy sitting on laps and will do so calmly, after the initial excitement of meeting new people has passed. They are very observant and will alert their family to any new developments without being overly noisy or aggressive. They are easy to care for and can do well in a smaller dwelling, provided they get sufficient exercise.

Puffin Dogs are quite small, reaching about 14 inches in height and weighing between 13 and 15 pounds. They have a short to medium length coat, which is fairly stiff and stands away form the body. They are usually brown, with black tipping and white markings. They are somewhat fox-like in appearance with a small, wedge-shaped head and pale eyes.

Their ears are quite large and, unlike most other breeds, can be closed to keep dust moisture out. Another oddity is that Norwegian Puffin Dogs have at least six toes on each foot. These toes have multiple joints and can be used to manipulate small objects. They have a double-jointed neck and a moveable shoulder joint, enabling the dogs to spread their forelegs at right angles to their bodies. 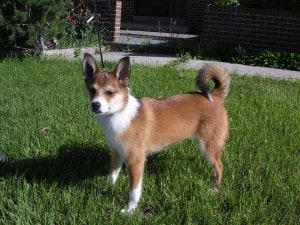 The Norwegian Puffin Dog was originally used to hunt Puffins. Puffins are sea birds similar in appearance to penguins that reside on the coast of Norway. The Puffin Dogs were highly valued by the people who used them for hunting, as the birds not only tasted good and had feathers that could be used for a variety of purposes, but also could be sold at market to bring in extra money. It is unknown when the breed originated.

Italian fisherman described the dog in writing as early as 1432, and written records of the breed have been kept since the 19th century. Many people believe that the Puffin Dog survived the last ice age and is a direct descendent of the primeval dog, Canis Forus. As with many breeds, the numbers of Norwegian Puffin Dogs declined greatly during and after World War II. In the case of the Puffin Dogs, it was disease that brought its downfall.

When the disease was eradicated, only six or seven of the dogs remained. However, Christie and Monrad Mostad toiled and managed to revive the breed. Today, there are about 1,000 Puffin Dogs in the world, with 150 of them being in the United States. The first American Puffin Dog litter was born in New England in 1987. The Norwegian Puffin Dog is recognized by the Canadian Kennel Club and can be registered with the CKC or the Norwegian Lundehund Club of America.