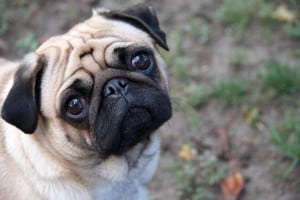 A truly ancient breed, the Pug is believed to have been in existence as early as 300 B.C. Its exact origins are unknown, but it is believed that it shares its ancestors with the Pekingese.The Pug is playful and even-tempered and makes a great pet, and a passable watchdog. The Pug is a stable breed, tolerant of strangers and loving of children, but they will sound a brief alarm when a stranger approaches.

They are very playful, loyal, and quite responsive to obedience training. The breed standard says they are “multum in parvo,” meaning a lot of dog in a small package. They are good with children and other animals and are good dogs to have in urban environments without much space. Because of health problems, it is essential to get a Pug from a reputable breeder, as opposed to a pet store.

Pugs are quite small. They average about 11 inches in height and should not weigh more than about 18 pounds. Pugs have a distinctive appearance with a very wrinkled face, giving them a wise or sad expression. The Pug’s coat is usually silver, apricot-fawn, or black and has a black mask and ears. Their eyes are dark and quite large. Pugs have a sturdy, square body, and a tightly curled tail. Their body is muscular and they have straight legs. The Pugs skin is loose, but without wrinkles except for on the face. 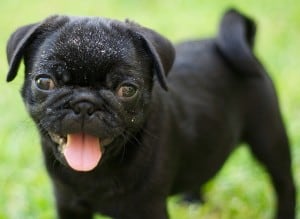 The Pug was likely a companion of emperors of China’s Shang Dynasty, 3000 years past. The small companion dogs of the emperors were treated as royalty themselves, with their own carriages and attendants. During the 14th-17th centuries the small dogs had to share their popularity with cats, but by the end of the 17th century the Pug had once again become a favorite, due to its status as a “sleeve dog,” or a dog small enough to fit in the sleeves of robed garments. When European traders were permitted to trade at Chinese ports, the dogs were one of the things they traded. The Pug first left the orient with the Dutch East India Company.

They first went to Holland, and then on to England. The Pug was the favorite dog of King William III, who assumed the throne of England in 1688. From that time on, the Pug was one of the favorite dogs of English nobility. In Britain, the Pug was first known as the “Dutch Mastiff,” due to its big dog nature, in a small package. The Pug is also quite popular in Holland, where it became a 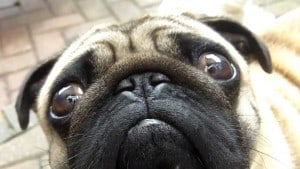 national symbol after a Pug warned Prince William and his household of invading Spaniards. The American Kennel Club recognized the Pug in 1885.

Pugs should be brushed quickly once a week. Further grooming, other than frequent cleaning of the face wrinkles with damp cotton balls, is not necessary. Pugs are not particularly active dogs and should be content with one walk daily.Deformities of the Pugs mouth and muzzle can interfere with breathing. Pugs are susceptible to tooth and gum problems and their teeth should be cleaned regularly. Other breed related health concerns include Legg-Perthes disease, Demodex mange, heatstroke, bladder stones, urethral obstruction and patellar luxation.