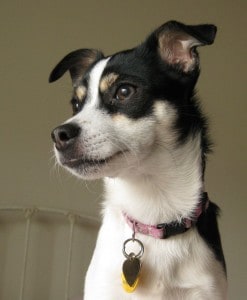 The Rat Terrier has a long history. It was originally bred in England in the 1820s and is a cross between the Fox Terrier and the black and tan Manchester Terrier. They were once known as “Feists” because of their eagerness to hunt everything. The early members of the breed were mostly black and tan, like the Manchester from which they descended.The Rat Terrier currently holds the record for killing rats – 2,501 over a seven-hour time period.

However, they are adept at hunting all types of animals, not just rats. In the south, the Rat Terrier is known as the “squirrel dog” because of their ability to catch the quick, small animals. They are also often used to jump deer, seeking out the deer and chasing them for about 200 yards before returning to their master.

The Rat Terrier is also great at tracking wounded animals and hunting game birds, squirrels, and other small game. They also make great house pets because of their neat, self-groomed appearance, intelligence, and playful, lively nature. The Rat Terrier is also wonderful in families with children and other animals. They love children, adults, other dogs, cats, birds and even small rodents, if these are part of their household. 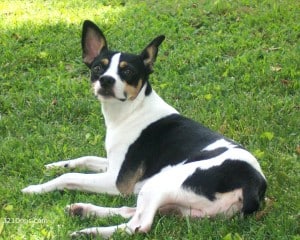 They are classified as relatively aggressive in our listing because some do show aggression towards small animals such as rodents but the Rat Terrier is not an aggressive terrier, as is the case with some other terrier breeds. They are easily trained, not average. It is not difficult to train these dogs to do anything. They are currently used as search and rescue animals, service dogs, for people in wheelchairs and this is one of the reasons that they are used as show dogs.

There are five sizes of Rat Terrier in existence. The first is the Toy Tot, or Tiny Tot. Dogs in this size category must be less than 5 pounds. The second is the toy size and dogs in this category weigh from 5 to 10 pounds. The next size is the Mini size, which includes dogs in the range of 11 to 15 pounds. The fourth size range is the standard, where the dogs weigh between 16 and 24 pounds. The last size is considered an offshoot and may soon be recognized as a separate breed. However, at this time the Decker Giant is still recognized as a Rat Terrier and weighs between 25 and 45 pounds. There are two body types A and B…and two ear types button and erect. 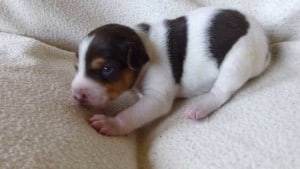 Type-A Rat Terriers have body length nearly equal to height. You specifically can see the introduction of the whippet in dogs of this body style. The whippet was used to make these dogs sight-oriented, give them speed and add other colors into the mix. In the Type-B style Rat Terrier, the smooth pocket beagle was used to shorten the legs and increase the scent and hearing. The B type Rat Terrier has a longer length to the body compared to height.

Although the National Rat Terrier Association claims that the two types show no differences, some Rat Terrier experts have seen differences between the two types. According to some, the B-type Rat Terrier tends to be more laid-back and relaxed compared to the A-types. In general, the Rat Terrier has a short, smooth coat, and is accepted in a variety of colors and markings. Accepted colors are Black, blue, red, apricot, lemon, charcoal, chocolate or liver. The browns may be seen in a variety of shades that include sable, fawn, tan.

The chocolate and liver varieties must have a chocolate, liver or red nose. Accepted markings are colored with white, colored with tan, and colored with white and tan. In addition to solid colors accepted patterns include Tri, Piebald (spots of color), Bi-color (no white), and solid with ticking. The Rat Terrier has a slightly rounded skull, (never domed like the Chihuahua) and medium length muzzle. Its eyes are small and dark. It has a deep chest and straight back, with strong, muscular legs. 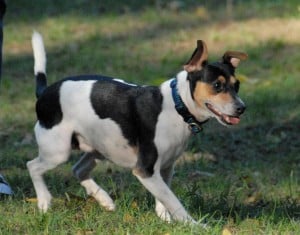 The first Rat Terriers were imported to the United States in 1890. At this time, more Fox Terrier blood was input into the line, resulting in a different coloration. The coloration that became common at that time, and is still the norm today, was white with black and tan markings. At the turn of the century, many considered the breed to be simply Fox Terriers, which was not the case. Teddy Roosevelt was an aficionado of the Rat Terrier and always took them with him on hunting trips, as well as keeping them as house pets.

Today the Rat Terrier is gaining recognition in many breed clubs, though it is not recognized by all. They are more popular in England than they are in the United States.The Rat Terrier is a very clean, exceptionally easy dog to take care of in terms of grooming. The breed is very hypoallergenic and once they have reached adulthood, they barely shed at all. They are not hard to keep clean because they have very short hair, which is usually quite thin.