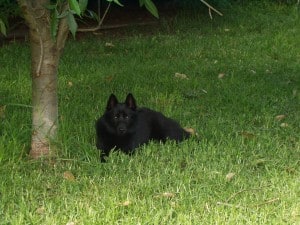 The Schipperke’s name means “Little Captain” in Flemish. The breed was developed in Belgium during the 17th century and was very important to seafaring people, because they kept boats and barges rat-free.Schipperkes are very intelligent and curious. These dogs make devoted family members and generally do quite well with children, particularly when socialized with them from an early age. Children must be reminded not to play too rough with their Schips. Schipperkes are wary of strangers and make fairly good watchdogs.

They do well with other animals. Schipperkes tend to be very stubborn, which can cause problems when it comes to obedience training. They may also be protective of their food and toys. To train the Schipperke, it is necessary to be gentle and patient, but make sure the dog knows who is in charge. While Schipperkes are active dogs they do not require a lot of exercise making them wonderful apartment dogs.

The Schipperke is quite small, reaching only about 13 inches in height and weighing up to 18 pounds. They have a thick, straight, harsh outer-coat and a soft, dense undercoat. The Schipperke’s hair is shorter on the face and legs. The Schipperke has a fox-like face, which many think resembles that of a terrier. Schipperkes are almost always black, although the coat may take on a reddish hue when shedding. 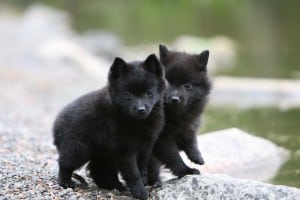 In addition to keeping ships rat free; Schipperkes were also useful to shopkeepers who used them to keep vermin out of their shops and homes. It was not until the mid 19th century that the Schipperke became popular among less plebeian classes. However, after the 1850s the Schipperke became the most popular housedog in Belgium, especially among the upper class. The British discovered the Schipperke breed in about 1885 and many were imported to England and the United States.

However, the Schipperke did not become popular in the States until about 1930.Schipperkes are known for their ease of care, in fact they are often called “wash & wear” dogs because they require practically no grooming except at shedding time. Brushing when needed is all that’s required to keep this beautiful dog looking wonderful.Some common health concerns associated with the Schipperke include epilepsy, Legg-Perthes Disease and hypothyroidism.