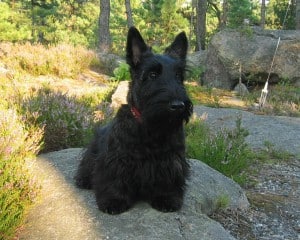 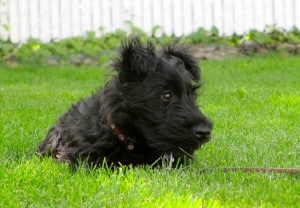 They are not the best choice for a first time dog owner, however, because they are so stubborn. The devotion of the Scottish Terrier is well known, and they will generally do well in families with children if they are socialized with children from puppy-hood. The Scottish Terrier has many of the general terrier characteristics; it is swift, and feisty, making it a good watchdog or rodent exterminator. Today, the majority of Scotties are kept as family companions, and though they are wildly popular, potential owners should keep in mind their “terrier” instincts to dig and hunt are still intact.

The Scottish Terrier retains many of the personality traits for which they were originally bred, and for this reason it is important they not be outside off leash as they can and often will go chasing after small animals.The Scottish Terrier’s average height at maturity is ten inches, according to the Scottish Terrier Club of America’s guidelines, and they average weights between 18 and 23 pounds. Its coat is wiry, stubbly, and coarse. The accepted colors are black, brindle, black brindle, silver brindle, red brindle and wheaten. Its soft undercoat is very thick.

The Scottie requires grooming to keep it looking trim. Its coat may be trimmed to soften the harder outer coat’s texture, but show dogs are usually stripped â” not clipped. Its head is broad and rounded, and its eyes are small, dark, and almond shaped. Its ears are erect, and naturally pointed ears. The Scottish Terrier’s chest is deep and broad, and its body is short and sturdy with a medium-length tail. Its tail can either be straight or slightly curly. Its movement is smooth and graceful. 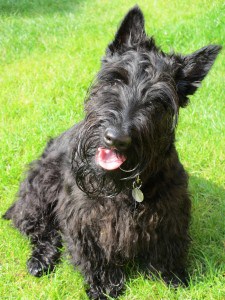 The Scottish Terrier is related to the West Highland White Terrier, and it may have originally been known as the “Aberdeen Terrier”, though many sources state that the Aberdeen was in fact an ancestor to the Scottie. It was separated from the “Westie” by breeders who sought to develop dogs for new abilities and separate traits. Though originally used to hunt badgers and foxes the Scottish Terrier is now typically kept as a pet. It is a fearless and robust working dog.

The Scottish terrier requires professional grooming at least four times a year. In addition they need to be brushed several times a week. Being an active dog, they should be exercised daily with brisk walks and active playtime.This breed is prone to ‘Scottish Cramp’ (appears during the first year, causing muscle stiffness and limping when the dog is exercised or excited), von Willebrand’s disease (akin to hemophilia in humans), craniomandibular osteopathy (abnormal bone growth in the head region, seen in young dogs), allergies, intervertebral disc protrusion, and elbow dysplasia. Some Scottish Terriers are also prone to skin allergies. Careful attention to diet and feeding natural foods with no preservatives and no food coloring often helps.