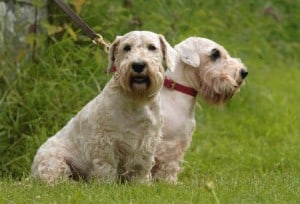 Captain John Edwards first bred the Sealyham Terriers on his estate in Pembrokeshire, Wales sometime around 1850. Captain Edward created this breed because he was dissatisfied with existing terriers. While the exact origin of the breed is unknown, it is thought that the Dandie Dinmont, the West Highland White, the Wire Fox Terrier, the Bull Terrier and the Welsh Corgi were all used in breeding the Sealyham Terrier.

Sealyham Terriers are quick, courageous little dogs that make great house pets and companions. They enjoy the company of children, provided the child is gentle. If a Sealyham Terrier is to be around small children, it is necessary to socialize them early. Sealyhams, being naturally careful of strangers, make excellent watchdogs. They have a surprisingly loud, deep bark that they will sound when a stranger threatens.

It should be noted that this breed will sometimes show aggressive behavior to strangers. Sealyhams, being bred to catch small animals, will often show aggressive behavior towards other animals unless properly socialized. They can be responsive to obedience training, however, it is necessary to maintain dominance and begin training early. This breed does require a fair amount of exercise, but they will usually do well in apartments provided they are given ample walks.

The Sealyham Terrier is fairly small, rarely exceeding 10.5 inches in height and weighing about 23 pounds. They have a firm, coarse overcoat that protects them from bad weather and a soft, thick undercoat. Sealyhams are always entirely white or white with darker markings on the head. Sealyham Terriers have a beard and bushy eyebrows, which distinguish them from other, similar breeds. 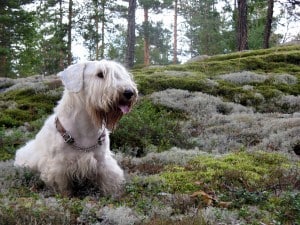 Sealyhams were originally bred as working dogs – courageous and fast. They were used to hunt otters, badgers, and small rodents like rats and weasels. When Captain Edwards originally created this breed he was very selective about which dogs would be kept in the breeding program. Any dog that could not, at the age of one year, tackle and kill a polecat was shot. The Sealyham Terrier Club was founded in 1908. In 1911, the British Kennel Club recognized the breed.

During the 1920s, many dogs were imported to the United States where they quickly became popular as companions and in the ring.The Sealyham Terrier needs to be brushed a couple times a week and trimmed about four times a year. They should be walked several times a week and be allowed to play freely often.Some common health problems associated with Sealyham Terriers include allergies, eye problems such as glaucoma, and deafness.