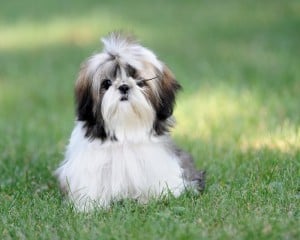 The Shih Tzu has been in existence for several centuries. It is believed that Tibetan monks bred the first Shih Tzus, along with Lhasa Apsos and Tibetan Spaniels. Shih Tzus were originally bred as companions and also to be given as gifts to visiting nobility.Unlike other, larger breeds that were bred for utilitarian purposes, the Shih Tzu’s only purpose has always been as a companion or filling the roll of good-will ambassador to the rich and powerful. They enjoy the company of children and other animals and are not aggressive towards strangers.

They respond fairly well to obedience training and are good apartment dogs. Because they are so small they should be supervised when playing with very small or overly rambunctious children as the diminutive size can work against them. They may also be jealous of small children or babies, thinking that the youngsters are infringing upon the dog’s territory. They are excellent companions, however, for older children, especially those who may enjoy grooming the dog. Because Shih Tzus have a very long, fine coat about half an hour of grooming per day is necessary. 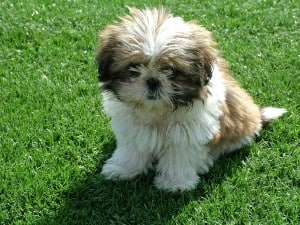 Shih Tzus do well with other animals and with strangers. However, due to their active and alert temperament they may yap when an unknown person arrives, making them good watchdogs as well. They respond well to training, provided the training is gentle and the one doing the training has patience. Shih Tzus were bred to be spoiled and may assert their self-confidence if they feel they are being neglected. They can also be quite stubborn, so patience and persistence are essential when training a Shih Tzu.

The Shih Tzu is a very breed. They rarely exceed 11 inches and have a maximum weight of around 16 pounds. Upon first glance, it may appear that much of that 16 pounds is the Shih Tzu’s coat. They have a very luxurious double coat. It is long, silky and fine, yet quite thick and sometimes wavy. The hair on the face of the Shih Tzu grows in all directions, giving the dog the nickname “Chrysanthemum-Faced Dog.” Common coat colors are black and white, gray and white, and tan and white.

Due to extensive mass breeding and crossbreeding, it is essential to obtain your Shih Tzu from a reputable breeder.In 1850, the monks sent several of the dogs to the Manchu emperors in Peking, where they acquired the name “Tibetan Shih Tzu Kou,” meaning “Tibetan Lion Dog.” The Shih Tzu quickly became a favorite of the emperors. Further bolstering Tibet’s reputation for generosity to Chinese nobility, the Dalai Lama sent a few Shih Tzus to Tzu Hsi, the Dowager Empress of the Manchu Dynasty. 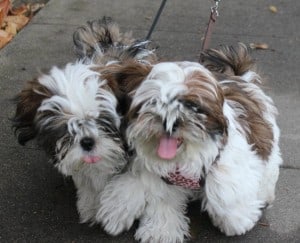 Tzu Hsi was well known as a breeder of Pekingese and began breeding Shih Tzus as well. While the empress was careful not to crossbreed, after her death it is likely that her successors were sloppy and crossbred the Shih Tzu with the Pekingese and Pugs. In 1930, about 20 years after the fall of the Manchu Dynasty, a visitor from England became aware of the Shih Tzu. This visitor was Lady Browning, and she carried several of the dogs from Peking back to England. In 1935, the Kennel Club recognized the Shih Tzu.

Many Shih Tzus entered the US after World War II when American soldiers returned. The American Kennel Club recognized the Shih Tzu breed in 1969 and, in 1994, was the 12th most popular breed registered with the AKC.Because of the Shih Tzu’s long coat, it must be brushed and combed daily. Shih Tzus do not require a lot of exercise. One walk daily and some playtime should be sufficient.Common health problems associated with the Shih Tzu include kidney problems, eye problems, atopy, von Willeband’s Disease and hypertrophic pyloric gastropathy. Because of their long, hairy ears they may also be prone to ear infections.