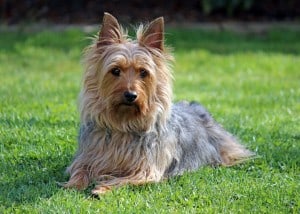 While responsive to obedient training, the Silky needs to know who is boss in the household. They can be jealous of other animals and have been known to bark excessively, so early socialization and training is essential. Although the Silky Terrier is independent and strong-willed, they can do well in obedience training, as they are quite eager to learn. Silky Terriers enjoy chasing cats and so should be kept on a leash unless in a secure area. They also tend to pick fights with other dogs. The temperament of Silky Terriers varies from dog to dog. 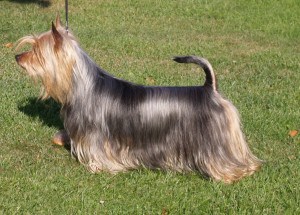 While some enjoy the company of all people, even strangers, others are quite cautious of strangers and so should be supervised. The Silky Terrier is quite intelligent and bonds well with its family, but must be socialized to children early. If acquainted with children early in life the Silky Terrier is quite loving towards them, but the children must treat the dog with respect and not handle him too roughly. Silky Terriers make excellent watchdogs, barking at the slightest intrusion, but this barking can become a problem.

The Silky Terrier’s name stems from its coat, which is long, fine, and shiny. The coat parts down the middle of the back and generally appears in shades of blue, red, or blue with tan markings. A large variety of shades of blue appear, although the pups are born black. The Silky Terrier is a small dog, averaging nine-10 inches in height and weighing no more than 11 pounds. They are compact, muscular animals. Silky Terriers have erect ears and a flat head. The tail is usually docked. Silky Terrier’s eyes are dark and round and the nose is black. 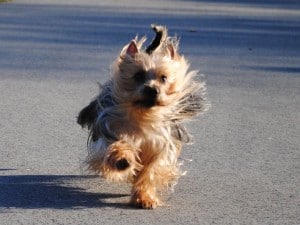 Although primarily a companion dog throughout its somewhat brief history, Silky Terriers were also used to catch small rodents. It is thought that the first Silky Terriers were brought to America after World War II, when members of the military stationed in Australia brought them home with them as pets. The AKC first recognized Silky Terriers in 1959. The breed standard was established in 1962, and all the major kennel clubs now recognize Silky Terriers.

The Silky Terrier needs to be brushed several times a week to avoid knots and matting. They should also be trimmed four times a year. Although they are small dogs that can expend the majority of their energy indoor, they should be walked several times a day and given playtime daily as well.Some common health concerns related with the Silky Terrier are storage disease, a nervous system disorder that can be fatal; yeast dermatitis, patellar luxation, Legg-Perthes disease, tracheal collapse, and elbow dyspasia. Silky Terriers have also been known to have diabetes and epilepsy.