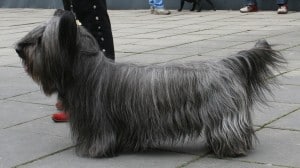 Skye Terriers were originally bred to catch vermin. They originate from the Isle of Skye, near Scotland.Those who have lived with Skye Terriers know that this breed is extremely loyal. One story exists of a Skye Terrier by the name of Greyfriar’s Bobby, who, after his master’s death, visited the grave every day until the dog himself died. Skye Terriers are very curious and smart, yet can be quite aggressive towards other animals. If other pets are to be in the same household as a Skye Terrier, early socialization is necessary.

In addition, many Skye Terriers dislike strangers and have been known to nip at those unknown to them. However, they bond well to one owner and can be quite affectionate in that relationship. Early and ongoing training is necessary to make them less aggressive towards strangers and children. It is necessary that the owner of a Skye Terrier begin training early to maintain a dominant position. Skye Terriers can be good with children if socialized with them early, but may be better suited to households in which adults are the only members of the family.

Skye Terriers are very unique looking dogs. They are small, reaching only about 10 inches at maturity, and weighing no more than 28 pounds. Despite their small size, they are quite strong. Their coat is rather long and feathered. It falls over the face, a trait that protects the dog’s eyes from brush when hunting. The Skye Terrier is a double-coated breed, with a long, straight overcoat and a short, soft undercoat. Common shades for the coat of the Skye Terrier include black, gray, blue, silver, tan, or cream. 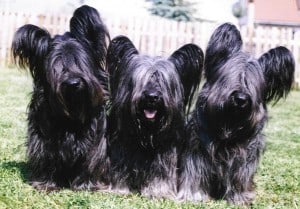 Although the Skye terrier was bred to hunt rodents, they became quite popular among the nobility of England in the 19th century. Queen Victoria kept several Skye Terriers, which sparked a trend among the ladies of the nobility to have Skye Terriers as pets. It was actually considered a fashion faux pas for a lady to go into public without her Skye. The American Kennel Club recognized Skye Terriers in 1887.

Because of their long coats, Skye Terriers need to be combed several times weekly to avoid matting. They should be trimmed four times a year. Although they are small dogs and can expend some energy at home, they should be walked daily and be allowed to run occasionally.Some health problems common among Skye Terriers are atopy, copper toxicosis (which can lead to liver failure) and hypothyroidism.