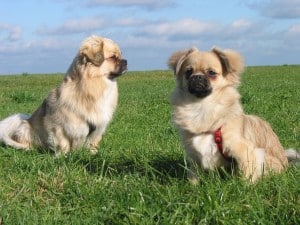 The Tibetan Spaniel has a long and diverse history. They have been bred in Tibet and China for thousands of years. Evidence suggests that they have been in existence since 200 B.C. making them an ancient breed. They were used both as companions and watchdogs, usually in Tibetan Monasteries. They had a very broad range of abilities and uses. Besides being watchdogs, alerting the monks to approaching strangers, they were responsible for turning the prayer wheels.

A prayer wheel was a hollow cylinder in which prayers written on parchment were placed. Each turn of the wheel was thought to take the prayers closer to the heavens. Another task placed on the small shoulders of the “prayer dogs” was that of keeping the monks warm. Their small bodies would curl up on the laps and inside the sleeves of the monk’s robes during meditation and other intellectual pursuits.

Tibetan Spaniels make wonderful companions, as well as good watchdogs. They are quite confident and do well in obedience training. They are very lively, active dogs that love to play. While they enjoy sitting (and perhaps meditating, considering their history), they also enjoy chasing balls and romping with their family and other dogs. Tibetan Spaniels like to be around their family at all times and can become anxious if left alone for an extended period. 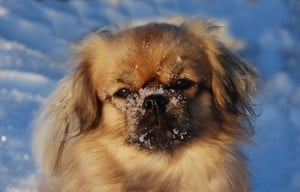 They are quite friendly and do well both with other animals and children, provided the children are gentle. They can be aloof towards strangers and will sound an alert when someone comes to the door, but they are generally accepting of other people once they become familiar. Because they are so small, they can do well in any setting, including small apartments.

Tibetan Spaniels average around 10 inches in height and rarely weigh more than 15 pounds, and have an average life span of 14 years. They have a smooth, fine coat with a thick and soft undercoat. The Tibetan Spaniel is a “lion” dog, so called because of the mane of longer hair that grows around the neck. The coat of the Tibetan Spaniel can be a variety of shades, ranging from hues of white and cream to red and black. They have a long tail, which is covered in fur and curls up and over the dog’s body. The name of the Tibetan Spaniel is deceiving: in actuality they are not a Spaniel at all but rather is related to other Asian lion dogs including the Japanese Chin, Pekingese, Pug and Shih Tzu. 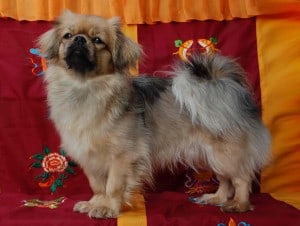 Historically, Tibetan Spaniels were considered quite valuable and were given to visitors of the monasteries, including Chinese noblemen and officers. The first written documentation of the Tibetan Spaniel comes from Marco Polo, who speaks of the “golden-coated nimble dogs” found in the homes of the Chinese people he met on his travels during the thirteenth century. The first known Tibetan Spaniel that left Asia was a dog taken to England in 1895. It was not until 1947, however, that Sir Edward and Lady Wakefield brought breeding stock from India to Great Britain. Since that time, they have become quite popular throughout the world.

The American Kennel Club recognized them at the very beginning of 1984. Tibetan Spaniels should be brushed several times a week. They are basically lapdogs and are satisfied with a daily walk and should be played with every day. One health problem that is seen in some Tibetan Spaniels in is progressive retinal atrophy, it is reported that this disease does not occur in all countries.