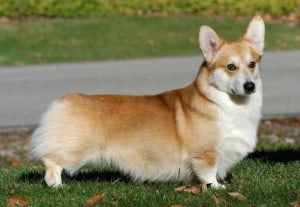 The Pembroke Welsh Corgi, also known as the “dwarf dog,” is one of the smallest members of the herding family. Pembroke Welsh Corgis are very active and energetic and will do as their owner commands willingly. Generally, the Pembroke Welsh Corgi is a very exuberant animal, happy, friendly, and loyal. They can be good in a family with multiple dogs, although it is generally for the best if the other dogs are not Corgis. Two male Corgis may often fight for dominance; this is why they are categorized as “relatively aggressive”. This does not mean that they are aggressive with people or other animals. Corgis can be happy in the same environment with those of the feline persuasion, as well as with other small animals, provided they are introduced to them at a young age. They are very work-driven and most Corgis do require a “job” of some sort, or they will find one.

A bored Corgi can be a destructive Corgi. Further, they are independent thinkers, often amazing their owners with the way they puzzle things out, think “on the fly” and are by no means easily trainable. Corgi’s can have a tendency to get bored with repetition, so training must be varied to keep them interested. If not properly raised and socialized, injuries can happen to children in the home when the corgi attempts to herd them. Corgis are drovers, meaning the herd by going for the heels of their herding targets; this can translate to a calf, back of the knee or the entire ankle in a small enough child. 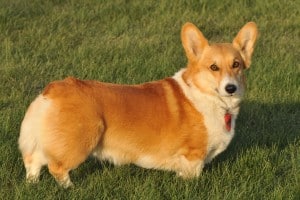 The Pembroke Welsh Corgi rarely exceeds one foot in height and generally weighs less than 30 pounds. In fact, it is the smallest dog in its class, the herding group. It has a medium length coat, that is short and thick with a somewhat rough in texture and colored in a variety of shades ranging from tan to black and all shades in between. The appendages of the Corgi are often, but by no means always, lighter colored than the outer coat. The undercoat is quite short and protects the Corgi from inclement weather.

The name of the Corgi is Welsh, deriving either from “cor,” meaning, “dwarf” or from cur, meaning “watch” and “gi,” meaning “dog.” While a legend tells a tale of woodland fairies carrying the Corgi as a gift to the Welsh, it is far more likely that the breed was first brought to Wales around 1107, by the Flemish people who were settling there. It is closely related to the Cardigan Welsh Corgi. In fact, at what point the two breeds became distinct is unknown.
Many people think the Pembroke Welsh Corgi is a cross between the Cardigan and the Valhund, a Swedish breed brought to Wales by Viking invaders. The marking difference between Cardigans and Pembrokes is the lack of a tail on the Pembroke (it is docked), although other differences (including different structure and size) are apparent to the discriminating eye. 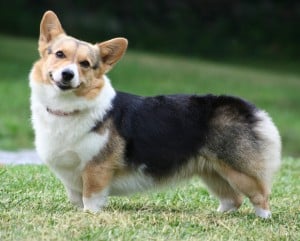 Regardless of their differences and origin, both breeds were used by Welsh farmers as herd dogs. Their main tasks were keeping cattle in line, protecting home and hearth, hunting, and being loving and loyal friends to their owners. They were first shown in 1925, in Wales, and have since been recognized by the American Kennel Club. The Pembroke Welsh Corgi does shed and should be brushed at least one a week. They should be walked several times daily.

Pembroke Welsh Corgis may be prone to several genetic diseases that they should be screened for prior to anyone considering to breed them. PRA, von Willebrand’s disease, retinal dysplasia, hip and elbow dysplasia, and hypothyroidism are but a few. Other health problems that are sometimes seen in Pembroke Welsh Corgis include intervertebral disc protrusion, epilepsy and bladder stones.

Breeding and propagation of the Pembroke Welsh Corgi is described as relatively difficult because Corgi’s are one of the breeds, which can suffer from Dystocia during the whelping process. It is not uncommon for a PWC or CWC for that matter to require surgical assistance by means of cesarean section to deliver a litter. In addition it is very important to screen carefully for the genetic diseases discussed in Special Care before considering breeding any dogs or bitches.