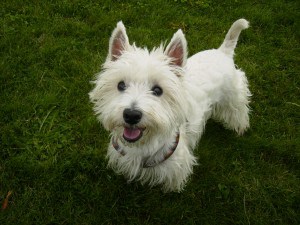 The West Highland White Terrier was originally used to hunt otters, foxes and rats in Poltalloch, a town in the highlands of Scotland. It likely is related to the Dandie Dinmont, the Cairn and the Scottie. They were first shown at Crufts in London in 1907, although it appears they were kept in Poltalloch for over a hundred years prior to their debut. Originally, the breed was called “the Roseneath Terrier,” a name that stems from Dumbartonshire, Scotland, at the Duke of Argyll’s homestead.

The West Highland White Terrier is a fairly small terrier that is quite comfortable in most settings, and due to its energetic, high-spirited attitude is a great family dog. Westies are usually very receptive to obedience training and make a great watchdog, barking at strangers yet accepting friends after a brief inspection. They are very playful and usually willing to engage in a game of catch with family children, provided it is introduced to the youngsters as a puppy. They are willing to accept other dogs and even cats in the household, although it may engage in dominance struggles with other dogs and chase stray cats if given the opportunity. 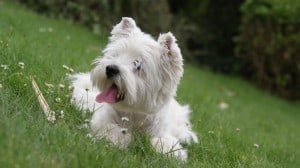 The West Highland White Terrier is an excellent hunter, very smart and sly, and extremely quick. They are excellent pets. They understand the needs of their humans and are also very loyal, but they are definitely not staid animals. They love to play, and if well cared for, are generally happy dogs. Westies like to assert their independence, but when all is said and done, they really are an ideal companion. Bred in Scotland, they exhibit the energy and stubbornness that is common among those of Scottish descent. The coat of the West Highland White Terrier is fairly short, about 2 inches in length, coarse, and straight. They have a shorter coat on the shoulder and neck area. 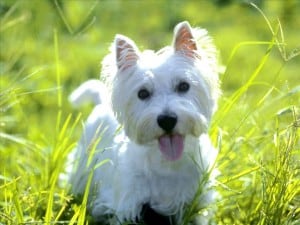 The undercoat is very soft and also quite short. It has small, pointed ears that are held straight and a black nose. As the name would suggest, the White Terrier is always pure white. One of the first breeders of Westies was Colonel Malcolm of Poltalloch. It is believed that his line goes back to nobility: King James I is reputed to have requested some “earth-dogges” from Scotland. The Malcom’s bred the Westies over generations to work with hunters. The West Highland White Terrier was at one time also known as the Poltalloch Terrier, and was first acknowledged by the American Kennel Club in 1908.

Brushing and combing bi-weekly are necessary to keep the West Highland White Terrier neatly groomed. They should also be trimmed four times a year. They should be walked and played with multiple times daily to keep them healthy and happy. Westies are prone to copper toxicosis, which can lead to liver failure. They are also known to get cataracts, deafness, inguinal hernia, atopy, pyruvate kinase deficiency (an enzyme deficiency which can be fatal), craniomandibular osteopathy (excessive growth of head bones) and Legg-Perthes disease.