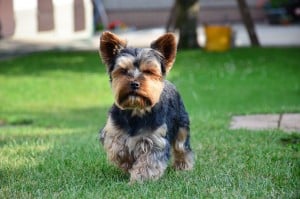 Yorkshire Terriers are small and energetic dogs, but have the attitude and confidence of a much larger dog. They tend to forget that they only stand about seven to nine inches. Because they are so small, they fit well into even the smallest of homes. Yorkies are good with children, provided the children are gentle with them, and not too young. Since Yorkshire Terriers are so small, an over-exuberant toddler can injure them quite easily. Small children should be well supervised around Yorkies, and it is best to acquaint Yorkshire Terriers to children while they are puppies.

Generally speaking, Yorkshire Terriers are friendly dogs; yet function well as a mini-watchdog, as they bark to announce the presence of strangers. They are responsive to obedience training but like to be in charge in their home. A small dog with a big bark, larger dogs will often cower to a Yorkshire Terrier. They have a high sense of self-worth and tend to be fairly independent, but in spite of this they make very good pets. They enjoy playing and also like hunting, if given the opportunity. 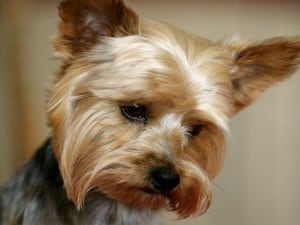 Yorkshire Terriers are quite attractive, with a long, straight and silky coat. The hair on the muzzle is particularly long and the hair on the head is generally parted or tied up with bows. While originally quite silky, this characteristic was cultivated through breeding. Puppies are born black and tan, and as the dog matures the color changes to steel blue and golden. It has been reported that Yorkshire Terriers may also be bred with shorter coats as well as different coat colors, such as tan and gray, and rust and tan. Gray and tan Yorkies are very rare, and both the sire and dam have to carry the gene that produces them. If either dam or sir is breed with a different Yorkie that does not have that gene, then they will have all black and tan puppies.

The major breed clubs currently accept none of these variances. Yorkshire Terriers were originally bred for the purpose of keeping down rat populations in the cotton mills and coal pits of Yorkshire, England. The miners extended the versatility of the dog, using them as sporting terriers in rat killing contests. The workers in the cotton mills improved the silkiness of the dog’s coats by passing on the oils from the cotton fibers with every pat.

While originally intended for hunting, it was quickly discovered that Yorkies would make marvelous pets. The trend of keeping Yorkshire Terriers as pets exploded in the Victorian era in England, and the growing fascination with all things Victorian fostered a boom in keeping Yorkies as pets in America as well. The earliest recorded birth of a Yorkshire Terrier in the United States was in 1872. Besides being a much-loved pet, the Yorkshire Terrier was quite successful as a show dog. “Yorkshire Terrier” was adopted as its official name in 1886, the same year it was recognized by the British Kennel Club. Since then, it has become one of the most popular breeds in the world, especially in England and the British Isles. 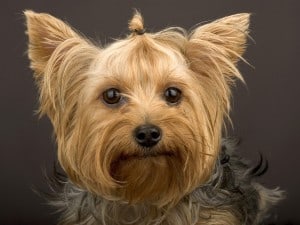 Due to their long coat, Yorkies should be groomed daily. While they are very energetic dogs, they only need to take a few short walks each day, since they use a lot of energy running around the house. A Yorkshire Terrier’s owner should be on the lookout for some specific breed-related health problems including hair loss, dental problems, patellar luxation, Legg-Perthes disease, hypoglycemia and portocayal shunt (which could result in liver failure and seizures, and may be fatal).

Although there are dogs that are much more difficult to breed than the Yorkshire Terrier, the Yorkie’s small size make it necessary to be very knowledgeable about breeding. It is very easy to lose an entire litter and even the bitch if you are not careful. Even with years of experience, a loss of 20 percent or more is not uncommon. The bitch almost always needs help and about half of the puppies are born breech. Be prepared to make a quick trip to the emergency vet.