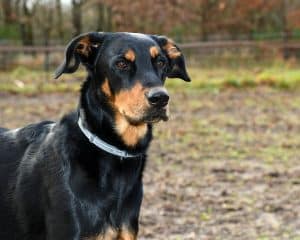 The Beauceron is a very old breed of dog, but surprisingly they are almost unknown in much of the world. This is due at least in part to the fact that the Beauceron is being bred almost exclusively in their native country France.

The Beauceron, also known as the Berger de Beauce, is a working dog. They are very patient dogs and learn quickly. They also have strong instincts to protect, home, family, and property. The temperaments of Beaucerons are extremely even and these intelligent dogs are quite calm. Beaucerons will usually make excellent guard dogs; since they have roots in guarding livestock, they will most likely guard your home very well.

They look authoritative and some may bark at strangers, but will almost never bite! They are known for their intelligence and will provide a wonderful pet for you, following your orders with the utmost attention to obedience and following you around. They are friendly dogs when treated right, and while they may be shy upon entering your home; they will eventually warm up to you and truly become “Man’s Best Friend”.

The Beauceron is also known to be very good with older children and the elderly; they are very gentle despite their large size. They are, however, rather large dogs and may seem overwhelming to a very small child. The Beauceron should be well socialized from an early age. They are intelligent and easy to train, so teaching them tricks or simply housetraining them is not difficult. Simply put, this dog will make an excellent pet, provided you can make an excellent master.

The Beauceron has eyes that match its fur pattern. This is typically black, rust, and gray, the colors evenly distributed along its body with absolutely no traces of white anywhere. The color combination may be bicolored, black and rust, or tricolored. The coat is thick, consisting of an under- and a top-coat. They have short fur and powerful, muscular builds.

They can grow to be a full 70 centimeters and weigh more than 100 pounds. Their tails are carried straight down and are rather low-set. The breed is characterized by its double dewclaws on the rear legs and ears carried high and proud atop the head. The Beauceron is cousin to the better-known Briard. The Briard is described as the longhaired version of the Beauceron.

Developed originally in France as a livestock guard dog, after the French Revolution, the Beaceron began to be bred more as a herding dog. The Beauceron was used heavily during wartime thanks to its amazing ability to take orders from humans; it could clear a foxhole in one leap and deliver things, as well as find mines, carry around supplies, and other amazing tasks that you would not expect a sheep dog to do on a battleground. They are becoming increasingly popular in the United States and UK, and it is no surprise to those who know the Beauceron. Beaucerons do not thrive when kept in small spaces or city apartments. They need plenty of space and exercise.