The Barbet is a French water dog. The name “Barbet” comes from the French word “barbe” which means “beard.” The female Barbet is called a Barbette. 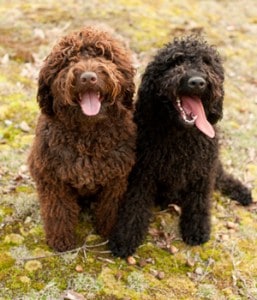 Friendly and kind, Barbets are excellent water dogs. They are quick studies and love to retrieve from water. They are characterized by their thick coat that gives them a woolly appearance and protects them from the cold. They are neither aggressive nor cowardly, showing a well-balanced demeanor. They are extremely devoted to their masters and families. As a hunter, they are adept at retrieving wild fowl, and can even point. They will prefer rural climates, but they can adapt to city life, as long as they can swim, hunt, and retrieve occasionally.

The minimum height for a Barbet is 20 inches for females and about 22 inches for males. Their hair is long, wavy, and woolly in appearance, forming a “beard” on the chin for which they are named. Their coats come in several colors, including black, gray, brown, tawny, sand, and white. The shade should be the same over the entire body. Their tails are attached low, forming a light hook at the end.

The Barbet was originally used as a hunter’s assistant for retrieving at sea. The exact history of the Barbet is unknown, but they are believed to have descended from water dogs found throughout Europe. They are thought to be the forerunner of Poodles, Otterhounds, Griffons, Newfoundlands, and other waterdogs.

The Barbet’s abundant hair will need to be groomed regularly to keep it from becoming tangled.